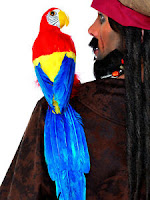 Pirate Captain Sam Bellamy said the coronavirus now is running America, and there isn't a dang thing President Trump can do about it - he no longer is in charge, what a novel experience for him!

I said the virus mangled landlubber economic systems across the board. The virus kills sickly and old people, who cost the most money to look after. Landlubbers' money god is in the ER.

Captain Bellamy said his parrot had told him in his sleep that the real concern is how people react to the coronavirus.

I said, after reading online that Germany ordered closing of bars, pubs, clubs and brothels, I wondered what will happen in Democrat stronghold Key West, if the City Commission, which recently banned cruise ships, orders the closing of that city's bars and brothels to protect the tourist hordes from contracting and vectoring the coronavirus into all of mainland America? Will the resulting Category 5 destruction of the Key West economy cause mass migration of much of its workforce to the mainland? Will that solve the city's acute affordable housing crisis and end estate development and make mermaids and all other native sea and land creatures in paradise happy?

I opined that on a cosmic level the coronavirus is the manifested blackness in humanity, and people like us, who were forced by angels and mermaids to see the blackness in ourselves, might be dragooned to process the virus inside of ourselves, because landlubbers in general are unable and/or unwilling to consciously do what is required.

I said I had read online that gun and ammo shops are very busy, and while I ain't no IRA guy, if I had a family, I'd have shotgun, rifle and pistol and plenty of ammo, a generator and plenty of fuel, food, water, medical supplies and toilet paper put away.

I said, after reading online that the coronavirus can cause nasal congestion beyond belief, I wondered if that explains why grocery stores are running out of toilet paper? It's is a lot cheaper than Kleenex.

Captain Bellamy emailed a report of his own Corona virus refugee migration norte:

I noticed Ol' Mad Don, the Pirate of Washington and West Palm Beach was wreakin' havoc all over. I decided to flee the Corona virus, apparently spread through bad beer, and there are lots of beer drinkers and hell raisers in Florida.

The good Captain's parrot suggested that he might set sail from where he had his ship moored in Everglades City to Savannah GA.

In Savannah, I had me parrot negotiate with some landlubbers for a contraption landlubbers call a "car" which is pain in me pirate ass- tags, insurance, and a license.

I had nearly cleared Georgia when I stopped at a Kangaroo station in Blairsville, GA to refill the tanks. The local MAGAs were on me, telling me and lots of other northbound refugees to go back to Florida and not be bringing the Corona virus plague with me and cleaning out their grocery stories while I was at it!

I was chased with tar and pitch and feathers and pitchforks! I could use the tar and pitch for me boat. And the feathers for a pillow. The pitchforks they seemed to want to stick where the sun does not shine and I do not mean under a dime.

I tried telling 'em: "I'm not the man with the spray tan from Palm Beach!"

Having decided cars are bunk, I went back to me boat and I'll moor off the 10,000 Isles of Florida City. No virus nor man can find me there.

I opined to Captain Bellamy that maybe Dr. Freud should be invited to offer this thoughts? Maybe what most scares the Blairsville MAGAs is the man with the spray tan repeatedly assured them the Corona virus scare was a Democrat and liberal media hoax.