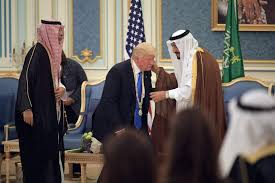 A friend told me yesterday that perhaps a spirit intervention had caused President Trump to abort a military strike against Iran for it downing an unmanned American drone, because the strike could have resulted in 150 human casualties, which was disproportionate to America having no human casualties.

None of that was in President Trump's announcement to call off the military strike in Iran. Nor was the fact that he had pulled America out of the nuclear deal between Iran and many countries, and had imposed tough economic sanctions on Iran, which led to what is going on now.

Perhaps Trump and Americans have forgotten Iran once was an American ally (puppet), when the Shah was its ruler. That led to a right-wing Islamic revolution and the Shah fleeing to Panama.

Iran had been a strong American buffer against the Soviet Union. America then got in bed with Saddam Hussien, for him and Iraq to replace Iran in that capacity. Iraq and Iran were in a long war thereafter. America backed Hussein.

Eventually, Hussein asked the American ambassador if America would mind him taking part of Kuwait. The ambassador said, no. Hussein invaded Kuwait. After saying he could not let the American way of life be threatened, former CIA director, the first President Bush, for whom the ambassador worked, created a coalition of nations to drive Hussein's troops out of Kuwait.

The coalition forces were allowed to stage in Saudi Arabia, which infuriated an Saudi royal family member named Osama bin Laden. Infidel military was forbidden to station on Islamic land.

In the aftermath of 9/11, the second President Bush invented a war against Iraq, which Donald  Trump pointed out during his 2016 campaign. Yet after being elected, President Trump continued that war and said Iraq's natural resources (oil) should be used to pay for the entire Iraq war. He said the same about the war in Afghanistan the second president Bush had started.

Both wars, President Obama continued after campaigning on hope and change and receiving the Nobel Peace Prize. President Obama and Secretary of State Hillary Clinton tried to out-hawk the two Bush presidents.

President Trump poured napalm on all of that, by withdrawing the Iran nuclear deal and recognizing Jerusalem as Israel's capitol (capital might be more appropriate).

All done by a man who had received repeated draft deferments. A man, whom I doubt could field strip and reassemble an M1 carbine in his youth, which I could do. A man, who recently raised yet again the specter of his serving more than two terms in the White House.

Back to the future.

I told my friend yesterday, that when I first learned President Trump had called off the retaliatory strike, I thought an angel had intervened, but I doubted Trump realized it.

I doubt anyone in Trump's administration, the Republican Party and the U.S. Military realize it. Perhaps there are Democrats and Independents who realize it. I think it more likely that people overseas realize it. I imagine Iran thinks Allah made President Trump back down.

Iran is run by Muslim religious leaders, which President Trump's Chrisitan evangelicals would like to see happen in America. Run by them. Or by Shah Trump. For the rest of his life.

Below is a 2018 article I found about Shah Trump pulling America out of the Iran nuclear deal.


Donald Trump pulls the United States out of the nuclear deal with Iran, renews sanctions


President Donald Trump says Iran has not lived up to its part of the deal, and "America will not be held hostage to nuclear blackmail." USA TODAY

(Photo: Pablo Martinez Monsivais, AP)
CONNECTTWEETLINKEDINCOMMENTEMAILMORE
WASHINGTON — President Trump said Tuesday that the United States will withdraw from the landmark Iran nuclear agreement and re-impose sanctions on Tehran, a decision that angered allies who fear the prospect of a nuclear arms race in the heart of the Middle East.
Declaring that "the decaying and the rotten structure" of the 2015 agreement does not block Iran from developing nuclear weapons, Trump said during a speech at the White House that "the Iran deal is defective at its core."
The decision drew criticism from Trump predecessor Barack Obama, who argued in a Facebook post that the deal is working and withdrawing from it is a serious mistake.
"The United States could eventually be left with a losing choice between a nuclear-armed Iran or another war in the Middle East," Obama said.
While European leaders said they would try to maintain the agreement with or without the United States, Iran's president said there is only a "short time" for renegotiations — otherwise his country could speed the process of enriching uranium, a component of weapons making.
“I have ordered Iran’s atomic organization that whenever it is needed, we will start enriching uranium more than before," Iran President Hassan Rouhani said on state television, adding that could start "in the next weeks."
Back in Washington, Trump also announced that Secretary of State Mike Pompeo is again traveling to North Korea to meet with Kim Jong Un to set up a meeting with Trump about Kim's nuclear programs.
Abrogating the Iran nuclear deal should not affect the prospects of a new agreement with North Korea to ends its weapons programs, Trump said, though some analysts questioned that declaration.  "We'll see how it all works out," Trump said. "Maybe it will, maybe it won't."
French President Emmanuel Macron, German Chancellor Angela Merkel and British Prime Minister Theresa May — all of whom urged Trump to stay in the Iran agreement — issued a joint statement expressing "regret and concern" over the decision.
Posted by Sloan at 8:46 AM