Who should pay for the Mueller probe? 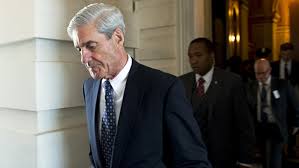 Who should pay for the Mueller probe?

The DNC should refund all Taxpayer Funds Spent On The Mueller Probe!$$$$$$$$$
From Wikipedia, the free encyclopedia
(Redirected from Special Counsel investigation (2017–present))
The Special Counsel investigation of 2017 to 2019 (also referred to as the Mueller probe or the Mueller investigation)[1] was a United States law enforcement and counterintelligence investigation of the Russian government's efforts to interfere in the 2016 presidential election. According to its authorizing  which was signed by Deputy Attorney General Rod Rosenstein on May 17, 2017, the investigation's scope included the allegation that there were links or coordination between Donald Trump's presidential campaign and the Russian government[2][3] as well as "any matters that arose or may arise directly from the investigation". The scope of the investigation also included potential obstruction of justice by Trump and others.[4] It was conducted by the Department of Justice Special Counsel's Office, headed by Robert Mueller, a Republican and former Director of the Federal Bureau of Investigation (FBI).
The Special Counsel investigation began eight days after President Trump dismissed FBI director James Comey, who was leading FBI investigations since July 2016 into links between Trump associates and Russian officials. Following Comey's firing, over 130 Democratic lawmakers in Congress called for the appointment of a special counsel, while the FBI began investigating Trump for obstruction of justice. The special counsel's office took over both these investigations from the FBI.[5][6][7]
The investigation resulted in dozens of indictments for federal crimes and at least eight guilty pleas or convictions. In August 2018, Manafort was found guilty on eight felony counts of financial crimes in the United States District Court for the Eastern District of Virginia[8] and a month later pleaded guilty to conspiracy to defraud the United States and obstruct justice in a plea bargain for his full cooperation with prosecutors.[9][10] The investigation also led to Flynn pleading guilty to making false statements to the FBI and as part of a December 2017 plea deal is required to be a cooperating witness in the investigations.[11] Mueller further secured guilty pleas from Manafort's business partner Rick Gates, Dutch attorney Alex van der Zwaan,[12] former Trump campaign adviser George Papadopoulos, lobbyist W. Samuel Patten[13] and Richard Pinedo.[14] Except Van der Zwaan, all have become cooperating witnesses for investigators. In February 2018, Mueller indicted 13 Russian citizens and three Russian entities, most notably the Internet Research Agency[15] and in June 2018 added an indictment of Konstantin Kilimnik, Manafort's business partner.[16] In July 2018, 12 members of the Russian GRU cyber espionage group known as Fancy Bear, responsible for the 2016 DNC email hacking, were indicted.[17] Investigations into Trump's personal lawyer Michael Cohen were referred to the Attorney's office of the Southern District of New York.[18] Longtime Trump advisor Roger Stone was indicted on seven charges in January 2019.[19]
While enjoying bipartisan support, the Special Counsel investigation became subject to criticism by Trump and his supporters. Trump has criticized people or groups related to the investigation over 1,000 times. On January 30, 2019, an FBI court filing revealed that someone located in Russia was also attempting to discredit the Special Counsel investigation through Twitter.[20][21] Russian people have also sent falsified documents to reporters.[22] Some allegations of investigators' misconduct have been raised and were almost immediately debunked.[23] Trump and his supporters criticized the cost of the investigation. By December 2018, the investigation had cost approximately $25 million while gaining approximately $48 million through asset forfeitures.[24][25]
The Special Counsel's office concluded its investigation and submitted the final report to Attorney General William Barr on March 22, 2019.[26] On March 24, Barr sent a four-page letter to Congress highlighting the special counsel's findings.[27] Barr said that on the question of Russian interference in the election, Mueller "did not find that the Trump campaign or anyone associated with it conspired or coordinated with Russia in its efforts to influence the 2016 U.S. Presidential Election".[28] However, the letter did detail two ways in which Russia attempted to influence the election in Trump's favor.[29][30] On the question of obstruction of justice, Barr said no conclusion was reached within the special counsel, saying that "while this report does not conclude that the President committed a crime, it also does not exonerate him".[28][31] Barr goes on to say the report identified "no actions that, in [his and Rosenstein's] judgement, constitute obstructive conduct, had a nexus to a pending or contemplated proceeding, and were done with corrupt intent." Barr additionally stated the Justice Department would be "in a position to move forward expeditiously" in releasing information after identifying material which by law cannot be made public.[32]

From Wikipedia, the free encyclopedia

William Pelham Barr (born May 23, 1950) is an American attorney who has served as the 85th and current United States Attorney General since 2019, having  served in the position from 1991 to 1993. Before becoming attorney  first time, Barr held numerous other posts within the Department of Justice, including serving as Deputy Attorney General from 1990 to 1991. He is a member of the Republican Party.

From 1973 to 1977, Barr was employed by the Central Intelligence Agency. Barr was a law clerk to Judge Malcolm Wilkey of the U.S. Court of Appeals for the District of Columbia Circuitfrom 1977 through 1978. He served on the domestic policy staff at the Reagan White House from May 3, 1982, to September 5, 1983, with his official title being Deputy Assistant Director for Legal Policy.[5] He was also in private practice for nine years with the Washington law firm of Shaw, Pittman, Potts & Trowbridge.[6] 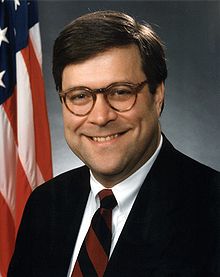 Official photo of Barr during his first tenure as Attorney General

Barr and Dan Quayle watch as President George H. W. Bush signs the Civil Rights Commission Reauthorization Act in the Rose Garden of the  House in 1991


In 1989, at the beginning of his administration, President George H. W. Bush appointed Barr to the U.S. Department of Justice as Assistant Attorney General for the Office of Legal Counsel, an office which functions as the legal advisor for the President and executive agencies. Barr was known as a strong defender of presidential power and wrote advisory opinions justifying the U.S. invasionof Panama and arrest of Manuel Noriega, and a controversial opinion that the FBI could enter onto foreign soil without the consent of the host government to apprehend fugitives wanted by the United States government for terrorism or drug-trafficking.[7]

Anyone interested can open this link and read a lot more about Barr.

sloanbashinsky@yahoo.com
Posted by Sloan at 8:54 AM