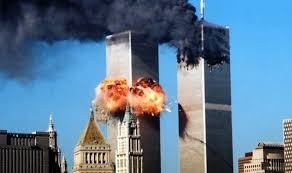 Was 9/11 an inside job?
Last night brought the end of the “Jericho” serial movie on Netflix. The drama is about a private military contractor mega-corp orchestrating nearly 20 American cities being nuked by bombs made from a discarded Soviet Union hydrogen bomb. The U.S. is then fractured into three countries: the old U.S. lying east of the Mississippi River, the Federation of American States lying west of the Mississippi, and Texas. Iran and North Korea are nuked to rubble, as the purported instigators. 99 percent of the action, though, is in and near Jericho, Kansas, in the northwestern part of that state. The people there are a long time coming to know what actually happened in the rest of America. Except for a captured U.S. tank cannon being used to shoot a mortar shell, the story line works pretty well. I will say no more about “Jericho” other than, when I realized the serial was over – for now – I said to nobody in particular, “I have no doubt 9/11 was an inside job, but I will never be able to prove it.”
My son-in-law, who is Jewish, recently defended American wars overseas by saying the president and top intelligence and military brass always know things they cannot tell the American public. I said he was correct, but, alas, Americans simply cannot trust their government to tell them the truth about wars, or about much of anything for that matter.
I told my son-in-law of a fellow telling me in 2005, that he once had worked for the CIA. His unit was stationed in Vietnam, when the French were fighting the Vietnamese over who would control Vietnam. Outwardly, America was supporting France, but his CIA outfit’s mission was to do all it could to help the Vietnamese beat the French, so that America could replace France in Vietnam, which had a whole lot of rubber trees.
Here’s how I learned what God thought about the Vietnam war.
Before the Vietnam war draft was instituted, I got married after my junior year in college. From college, I went to law school. After the war draft was instituted, married men and college students were exempt. Then, college students were allowed to finish college before they were inducted. My wife got pregnant, we had a son. By then, married men were being inducted, but not fathers. Our son died of sudden infant death syndrome during my senior year in law school. I became exposed to the war draft. I applied for a student deferment, so that I could finish law school. My wife got pregnant again. I went back to the Draft Board and told them what had happened. The lady clerk said she was sorry but the student deferment election was irrevocable. She said she would show me the form I had signed to that effect. She went to a green filing cabinet and pulled out my file and looked in it and said there had been some kind of mistake made. What kind of mistake?, I asked. You signed the wrong form, you will have to do it again, she said. No thanks, I will keep my father deferment, I said, and walked out of the Draft Board knowing a miracle had happened. By then, two of my college fraternity brothers had been killed in Vietnam. They had predicted before going over there, that they would die there.
I never will buy, nor I doubt did commercial airline pilots buy, that amateur Arab pilots were able to fly, maneuver and steer those giant passenger planes to their targets on 9/11. I have heard other arguments for 9/11 being an inside job. What a bonanza for the military industrial complex 9/11 became. One overseas war after another, to protect America.
Three nights before 9/11, a familiar voice I associated with Archangel Michael, asked me in my sleep, “Will you make a prayer for a Divine Intervention for all of humanity?” I woke up, made the prayer. When my girlfriend and I heard about the attacks on 9/11, we thought the very worse thing America could do would be start another war overseas. It did not occur to us that America would start two wars overseas.
A few days after 9/11, I sensed angels all around me as a left my local post office. I heard, “America needs to get out of the Middle East altogether and let Israel and Islam fight it out, or work it out, and in that way learn which of them, if either, is God’s chosen people.”
Iraq was an American ally against Iran. Iraq had a lot of oil. Saddam Hussein asked the American lady ambassador if the U.S. would object to Iraq going in and taking part of Kuwait? The lady ambassador said, No. Saddam invaded. The first President George Bush then went on national television and said he could not let the American way of life be threatened. He was not concerned about the Kuwait people, but about Kuwait’s oil.
Afghanistan had a lot of minerals and was where energy companies wanted to build a natural gas pipe line into the vast natural gas deposits lying east of Afghanistan.
During my sleep the night of the 1st anniversary of the prayer I had been asked to make for a Divine Intervention for all of humanity, I was asked by the same voice, “Will you make a prayer for a Divine Intervention for all of humanity?” But that time I made the prayer in the dream, and I ended the prayer with, “And let it begin in me.”
For a long periods of time, the angels who had trained and run me, had stood me before a mirror. They did it again.

In the Gospels, Jesus said it this way: "First take the beam out of your own eye."

During his campaign, Donald Trump said the Iraq war was invented. He got elected and continued G.W. Bush's two rich white men's 9/11 wars for corporate profit. Trump recently promoted himself for the Nobel Peace Prize.

anomalousinvestigation@gmail.com
Posted by Sloan at 5:31 AM