What's the chicken and what's the egg in Putin invading Ukraine? 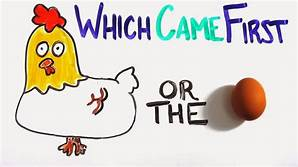 LETTERS FROM AN AMERICAN

Russia’s war against Ukraine continues. Fourteen wide-bodied aircraft from the U.S. and the European Union delivered anti-tank missiles, rocket launchers, guns, and ammunition to Ukraine today to help it hold on against Russia. The extra aid was approved less than a week ago, and the munitions began flowing two days later.

Russia’s economy continues to nosedive. The Russian stock market has been closed all week, and yesterday, a Russian stock market analyst took out a bottle and drank to the death of the stock market on live television. According to CNN’s global affairs analyst Bianna Golodryga, the Moscow Stock Exchange will remain closed through next Wednesday, and possibly beyond. Russians are fleeing their country into Finland.

Britain’s Queen Elizabeth, who is bound to be strictly neutral on political matters, withdrew invitations for a diplomatic reception issued to Russian and Belarusian diplomats to show her disapproval of the attack on Ukraine. She also gave from her private funds a “generous donation” to Ukraine humanitarian aid.

The U.S. has swung against Russia after years in which members of the Republican Party in particular have spoken admiringly of Russian president Vladimir Putin’s strength and commitment to so-called conservative values. Former vice president Mike Pence was expected to try to open up some space between Putin and the Republicans, telling a gathering of Republican donors tonight, “There is no room in this party for apologists for Putin. There is only room for champions of freedom.”

Former president Trump, who still commands loyalty from party members, has spoken admiringly of Putin’s attack on Ukraine. Pence’s statement appears to be an attempt to recenter the party away from Trump.

And, speaking of Trump, a legal filing by the House Select Committee to Investigate the January 6th Attack on the U.S. Capitol on Wednesday said that advisors repeatedly told the former president that he had lost the 2020 election and that he nonetheless insisted on pursuing the lie that he had won. In Salon, Amanda Marcotte pointed out that Trump apparently felt comfortable pursuing the lie because he did not believe there would be any consequences for his illegal behavior.

That conviction that the former president and his cronies were above the law clearly influenced Trump advisor Roger Stone, who permitted a Danish film crew to follow him around for more than two years, including during the days before January 6, 2021.

A stunning exposé in the Washington Post today by Dalton Bennett and Jon Swaine shows that Stone helped to coordinate the “Stop the Steal” protests and met before the January 6 riot with a member of the far-right Oath Keepers group who has since pleaded guilty to seditious conspiracy. Stone refused to let the filmmakers see him for about 90 minutes during the height of the violence on January 6—an aide said he was napping—but when the extent of the crisis became clear, he slipped out of Washington on a private plane, claiming he was afraid incoming attorney general Merrick Garland would prosecute him.

Stone then lobbied hard for a presidential pardon for himself and a number of Trump supporters in Congress for trying to overturn the election. When White House counsel Pat Cipollone opposed the requests, Stone texted a friend, “See you in prison.”

Stone has categorically denied all the conclusions drawn from the film footage.

What's the chicken and what's the egg?

I dunno if there is any connection/linkage...

Had Putin seen President Trump's attempted coup of the American government as encouragement to take over Ukraine's government?

Had Trump seen Hillary and the DNC's 2016 coup as encouragement for him to take over the American government?

Meanwhile, why else would Putin invade Ukraine, which is known as the breadbasket of Europe?

2nd in the world (12%) in explored reserves of manganese ore reserves;

2nd in the world in iron ore reserves;

4th in the world by the total value of natural resources;

7th in the world in coal reserves;

10th in the world in titanium ore reserves;

13th in the world in shale gas reserves.

1st in the world in exports of sunflower and sunflower oil;

2nd in the world in barley production;

3rd in the world in production of corn;

4th in the world in corn exports;

4th in the world in barley exports;

4th in the world in potato production;

5th in the world in rye production;

5th in the world in bee production;

8th in the world in wheat exports;

9th in the world in production of chicken eggs;

16th in the world in cheese exports and

can meet the food needs of 600 million people.

1st in Europe in ammonia production;

3rd in Europe in installed capacity of nuclear power plants;

3rd in the world in production of locators and locating equipment;

3rd in the world in exportation of iron;

4th in the world in exporting turbines for nuclear power plants;

4th in the world in manufacturing of rocket launchers;

4th in the world in clay exports;

4th in the world in titanium exports;

8th in the world in exports of ores and concentrates;

8th in the world in installed capacity of nuclear power plants;

9th in the world in exports of defense industry products;

10th in the world in steel production;

11th in the world in rail network length.