Jackass politics: Democrats hope disenchanted Republicans will cross over while Democrats wage civil war among themselves 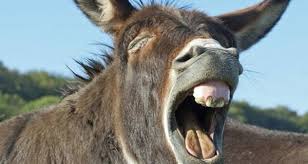 The beginning of yesterday's American historian Heather Cox Richardson letter below is about disenchanted Republicans voting Democrat, followed by my comment, which did not get even one tried and true Democrat nibble:

Both the New York Times and the Washington Post today ran op-eds from Republicans or former Republicans urging members of their party who still value democracy to vote Democratic until the authoritarian faction that has taken over their party is bled out of it.

In the New York Times, Miles Taylor and Christine Todd Whitman wrote, “We are Republicans. There’s only one way to save our party from pro-Trump extremists.” Taylor served in the Department of Homeland Security and was the author of the 2018 New York Times piece by “Anonymous” criticizing former president Trump. Whitman was governor of New Jersey from 1994 to 2001, after which she headed the Environmental Protection Agency under President George W. Bush.

Taylor and Whitman note that “rational Republicans” had hoped after Trump’s defeat that they might take back the party, but it is clear now, they write, that they are losing the party’s “civil war.” But while they originally hoped to form a new party, they now agree that the only way to stop Trumpism “is for us to form an alliance with Democrats to defend American institutions, defeat far-right candidates, and elect honorable representatives next year—including a strong contingent of moderate Democrats.” To defend democracy, they write, “concerned conservatives must join forces with Democrats on the most essential near-term imperative: blocking Republican leaders from regaining control of the U.S. House of Representatives” and the Senate.

They call for Republicans to put country over party and back moderate Democrats, while also asking Democrats to concede that “there are certain races where progressives simply cannot win and acknowledg[e] that it makes more sense to throw their lot in with a center-right candidate who can take out a more radical conservative.”

At the Washington Post, Max Boot takes an even stronger stand: “I’m no Democrat—but I’m voting exclusively for Democrats to save our democracy.” Boot is a Russian-American specialist in foreign affairs who identifies as a conservative but no longer supports the Republican Party. He writes: “I’m a single-issue voter. My issue is the fate of democracy in the United States. Simply put, I have no faith that we will remain a democracy if Republicans win power. Thus, although I’m not a Democrat, I will continue to vote exclusively for Democrats—as I have done in every election since 2016—until the GOP ceases to pose an existential threat to our freedom.”

Boot singles out the dueling reports from the Senate Judiciary Committee about the nine ways in which Trump tried to pressure then–acting attorney general Jeffrey Rosen to back his claims of election fraud. The Democrats on the committee established these efforts with an evidence-based report, only to have the Republicans on the committee, led by Senator Chuck Grassley (R-IA), respond that the president was simply trying to promote confidence in the election results and that since he did not ultimately replace Rosen with another lawyer who promised to use the Justice Department to challenge the election—after the other leaders of the Justice Department threatened to resign in a mass protest—he did not actually abuse his office.

Boot writes, “It is mind-boggling that a defeated president won’t accept the election outcome…. What is even more alarming is that more than 60 percent of Republicans agree with his preposterous assertion that the election was stolen and want him to remain as the party’s leader.”

Taylor, Whitman, and Boot are hardly the first to be calling out the anti-democratic consolidation of the Republican Party. Yesterday, Representative Adam Schiff (D-CA), who chairs the House Intelligence Committee, managed Trump’s first impeachment trial, and sits on the House Select Committee to Investigate the January 6th Attack on the U.S. Capitol, gave an interview to CBS’s Face the Nation in which he called the Republican Party “an autocratic cult around Donald Trump” that is “not interested in governing” or “maintaining the solvency of the country.”

But what makes today’s op-eds stand out is that they are from former Republicans, that they are calling not for a separate party but for Republicans to shift their votes to the Democrats, and that their identification of the Republicans as an existential threat to our democracy is being published in major newspapers.

Mainstream television and newspapers have been slow to identify the radicalization of the Republican Party as a threat to democracy. The Eastman memo, uncovered by Bob Woodward and Robert Costa at the end of September in their new book Peril, flew largely under the radar screen, explained away as more of Trump being Trump even as it laid out, in writing, the steps to overturn the 2020 election and even as we knew that the former president tried to put that plan into place. A study by Media Matters showed that ABC, NBC, and CBS all chose not even to mention the memo; they reach more than 20 million Americans.

On Saturday, a monologue by comedian Bill Maher about the Eastman memo titled “Slow Moving Coup” laid out in 8 minutes how Trump tried to steal the 2020 election and how, when officials resisted him, he set out to solidify his power for 2024. Maher woke people up to the ongoing crisis in our democracy.

Maher’s monologue, along with the draft Senate Judiciary Committee report, which sets out in detail the efforts the former president made to bend the Department of Justice to his will, seems to have driven home to members of the press the fact that they cannot present today’s news as business as usual, especially after their presentation of the debt ceiling crisis as a political horse race when one side was trying to save the country and the other to destroy it. In the Philadelphia Inquirer yesterday, journalist Will Bunch wrote: “The future of American democracy depends, frankly, on whether journalists stop burying their head in ‘the work’ of balanced-but-misleading reporting and admit that, yes, actually, we are at war.”