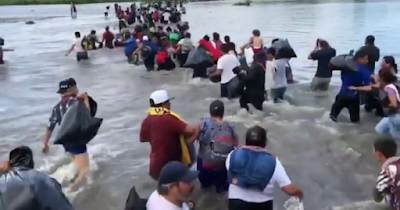 Last night, the “Trump Media and Technology Group” (TMTG) issued a press release announcing the creation of a “rival to the liberal media consortium” which would “fight back against the “Big Tech’ companies of Silicon Valley, which have used their unilateral power to silence opposing voices in America.” The new social media site was called “Truth Social,” and his team advertised it as the first piece of a media empire that would take its place beside the leaders in the field. Rather than a “tweet,” a statement on the new site would be a “truth,” and the terms of service prohibited criticism of the former president.

Mostly, truth and Donald Trump are mutually exclusive, and "Truth Social", which does not permit criticism of Truth Social or Trump, is hilarious and as Big Brother as it gets.

However, from Heather's letter:

"So, for example, we recently saw the story that in the midst of the early days of the pandemic, Trump adviser Stephen Miller went around then–defense secretary Mark Esper to try to send 250,000 troops to seal the border between the U.S. and Mexico. Aside from anything else, this would have dramatically weakened the U.S. around the world.

"But it was at least not as immediately damaging as the suggestion of then-president Trump, who wanted to launch military attacks on Mexican drug cartels within Mexico, an idea that he backed away from only when advisers noted that this would be seen as a U.S. attack on Mexico, which is our largest trading partner."

Bill Clinton and Al Gore promoted NAFTA, while Ross Perot was flat against it, because it would move a lot of American industry to Mexico where labor was much cheaper, and Americans would lose jobs, and that's what NAFTA did.

After Trump was elected, he adjusted NAFTA more in America's favor, but still it allows large American companies to harvest cheap labor in Mexico (and Canada) and make huge profits that do not get taxed like profits made in America.

Mexico being a major trading partner of America, for example, needs to be tempered with that reality.

Likewise, that reality needs to be tempered with the reality of Mexican drug cartels being awful for America.

Likewise, those two realities need to be tempered with the reality that immigration from Mexico is actually an invasion.

Why not use the American military to swoop in on Mexican drug cartels under the excuse the Mexican government has not the resources nor perhaps even the will do do it. Isn't that why America invaded Afghanistan, which harbored Osama bin Laden?

President Trump and now President Biden allow the American military to make drone strikes overseas. But it is not okay drone strike Mexican drug cartels, which are poisoning America with their products? Are the cartels not terrorists?

Or, Congress legalizes and taxes manufacture, distribution and sale of street drugs, like it does booze and tobacco, and domestic American companies legally put the Mexican drug cartels out of business.