Where would the Devil hide that no one would think to look? A church 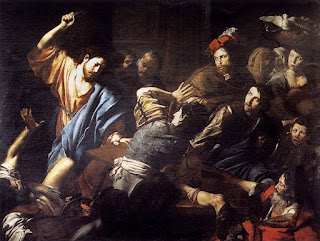 A little while back I published a bit about an old line church, which an old friend of mine attends. The first topic she raised was the newish pastor, an evangelist, talked a lot in his sermons about Jesus, as if the congregation never heard of Jesus. My friend then shared an email the pastor had sent to the congregation explaining why the church baptizes children. I told the parishioner how I felt she might do a personal intervention: stop attending church services, keep attending the Sunday school class she enjoys, and make waves in the Sunday school class. She decided to keep attending church services, and the pastor urged the congregation give more money to this well-endowed church. I reiterated the intervention I had told  her to try. I told her a malevolent entity had possessed the pastor and it was contagious and was infiltrating the entire congregation. I told her she did not speak out about the pastor asking for more money for the rich church. I asked her what Jesus in the Gospels would have done, had he been there? I told her of several disturbing ways the malevolent entity had attacked me. I didn't have a sense she accepted anything I told her.

The attacks continued, even as I wondered out loud this morning to a friend, whether I should attend a service in that church today, sit in the back, say nothing, then leave? My friend hears ongoing in his sleep and when he is awake from angels whose names are found in the Bible. I asked him to write a report of his and my conversation this morning. Here is what he later emailed me:

Dream: A line of children were lined up at deep spot in a river and crazed Preacher was ranting and dunking each child an inordinately long time. Long enough to nearly drown them, maybe a little less. The children came up with almost corpse like eyes, no color at the iris except a ring of strangely glowing blue. Of course, that was allegory, or parable, relating to the drive in Christendom to baptize children and bind them to the religion and its churches.
You and I were discussing churches and you said you wondered if you should go sit quietly in the back of your friend's church today? I heard a rather distinct answer, "Why should this church be any different than the others?"
You then said that was your thought exactly: Why would it be any different than any other church? You said it was a long time since you'd been in any church that was not filled with a feeling of evil. I stated to you that caused the following statement when you finished any church- the voice of Michael saying, "It is their chosen temple, let them fix their chosen temple."
Sloan, you had two different interactions with the church that caused this dialogue. The first was around the issue of child baptisms and the trauma they cause children. Indeed you pointed out that you found, having attended a number of churches, a horrific experience for a child to have to sit through. My feeling was the same- I can actually remember going to church with my mother's father and he went to a Baptist Church. Sunday School and then the sermons were so bad, I asked to leave. I could not stay. I bolted. My other grandfather attended church and I asked to go with him, he told me it was not a place for children and that I needed to be older and be able to think for myself before I sure go to a church. We discussed the overall frightening experience of baptism and how in churches it was a hollow symbolic act that could cause a child a lot of trauma. Moreover you and I discussed a child  baptism rant sent out by the pastor of the church that began all this discussion. Many of his scriptural citations had nothing to do with supporting his argument. There was a lot of Preacher Hocus Pocus that bordered on sounding like Charles Manson had been the author, but that is only my interpretation.
The other incident with the church that began this "lovely"(reader: lovely is dripping with sarcasm) examination of churches had to do with money and churches. Sloan, you recounted to me how the individual who attended this church said that it was financially well endowed as it was. The individual, to the best of my understanding also said that a number of financially well off people attended there. Despite it being a financially flush, the pastor dedicated a sermon or a large portion of a sermon to saying that people should give more to the church. The individual and friends claimed to have been horrified at this demonstration of avarice by the preacher but they stayed silent and did nothing. Neither you nor I thought very much of this, in fact both of us agreed that not standing up for the church was a serious lapse in judgement and a parishioner's duty to that church. It would seem that the preacher forgot the part of the scripture where Jesus turned over the table of the money lenders.
I remember asking my paternal grandfather why he only attended church sporadically. He asked me if I believed that God made the Heavens and the Earth. I said yes. He told me that all of creation was thus a church and he didn't need to be in a building to be in church- we were always in church and God didn't just watch us on Sunday 10am-1pm; God was aware of us all the time. Moreover, Grandpa said that you could not behave as a shit, con, swindle, rob, and abuse people the rest of the week and get a free pass by entering a building on Sunday 10am-1pm and then participating in a scolding and social hour. That is what molded a lot of my views.
I do not believe attending formal church IS AUTOMATICALLY going to make you a better person. In fact, it may make you a worse person- but it is not a get out of jail free for all the things a person does while not in church. There maybe some Church that is a building that will make you a better person, but I sure haven't found it yet. Not by a long shot. The only church I'm aware that will make you a better person is to try to experience all of creation and endure a baptism like Christ spoke of, and it isn't a social club, it is a Baptism of Fire where you must face your behavior, be held accountable, and deal with the karma.