God-botherers: American politicians, then there is Donald Trump 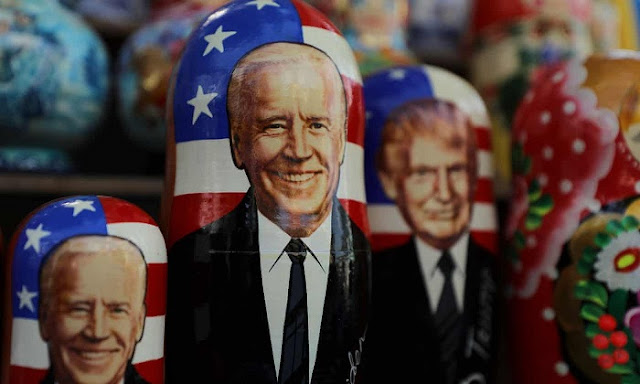 Except for Donald Trump, who believes only in himself, American politicians are inveterate God-botherers, sure that they were elected by their creator, not just by their constituents. While re-traversing the transfer of power between Trump and Joe Biden, Bob Woodward and his Washington Post colleague Robert Costa often pause as the wheelers and dealers they are tracking pray, text scriptural citations or glance sanctimoniously skywards. Biden fingers his rosary beads before debating Trump, and when Mike Pence performs his constitutional duty by ratifying the outcome of the presidential election, an aide congratulates him for fighting the good fight and keeping the faith. Later, Nancy Pelosi summarises her scheme for raising the minimum wage as “the gospel of Matthew”.

Yet despite such homages to the soul, what truly matters in the showdowns and face-offs that Peril documents is the chunky body and its thuggish heft. Among Trump’s enforcers, only the anti-immigrant ideologue Stephen Miller, whose skinny frame and slick fitted suits are noted by Woodward and Costa, has a lean and hungry look. Otherwise, power is exhibited by a swollen paunch. Bill Barr becomes attorney general because Melania thinks his “extraordinarily large belly” is a guarantee of gravitas. Mike Pompeo is “heavy and gregarious”, which implies that he has “little tolerance for liberals”. Brad Parscale, Trump’s former campaign manager, qualifies for his job because “at six foot eight and bearded, he looked like a professional wrestler”. Given this huddle of heavyweights, it amused me to learn that Biden’s entourage includes a “gut check” – no, not a dietician but a crony who offers a second opinion when the new president wants to act on instinct.

In the populist era, politics is about instantly gratifying appetite

Physical quirks and kinks such as these matter because they demonstrate that, in the populist era, politics is about instantly gratifying appetite, not making pondered, judicious decisions. Woodward and Costa give a revealing account of a lunch at which Trump receives the homage of Kevin McCarthy, minority leader in the House of Representatives. Trump orders his customary cheeseburger, fries and ice-cream, solipsistically assuming that his guest will have the same; he is startled when McCarthy foregoes the fries, bins the bun, and requests fresh fruit rather than a gooey dessert. “That really works?” sneers Trump, gobbling grease. What Pelosi calls his “fat butt”, on display to be kissed by McCarthy, advertises his immense self-satisfaction.

After the insurrection at the Capitol on 6 January, General Milley, chairman of the joint chiefs of staff, kept anxious watch on the nuclear chain of command because he feared that Trump “had gone into a serious mental decline”. But Trump could hardly regress, since he never advanced into rational adulthood. In Peril, he is indistinguishable from the Trump Baby, the diapered balloon that bobbed above Westminster during his state visit. As he suborns Pence to discount electoral results and nullify Biden’s win, his wheedling suggests dialogue overheard in a primary school playground. “Wouldn’t it be almost cool to have that power?” he asks, as if tempting the vice-president with some shiny new electronic toy. When Pence resists, Trump’s recourse is sulky petulance: “I don’t want to be your friend any more,” he whines.

Milley worries that Trump, berserk after his electoral loss, might reach a “trigger point” and order a diversionary attack China or Iran. Adam Smith, who chairs the House Armed Services Committee, is less alarmist. Smith agrees that Trump is a “mentally unstable narcissistic psychopath”, but argues that he’s incapable of starting a war because “he’s a coward, he doesn’t want that level of responsibility”. We were saved by Trump’s laziness and an inability to concentrate that Woodward and Costa blame on his addictive television-watching. To the consternation of advisers, he switches subjects capriciously; with a zapper where his brain should be, he can’t help flicking through the channels to see what’s happening elsewhere. On his way out of office, he drops only F-bombs, “spewing expletives” and screaming at cabinet colleagues: “I don’t care a fuck. You’re all fucked up. You’re all fucked.”

That versatile little word peppers the narrative of Peril, and turns out to be indispensable in the discourse of Washington DC. It gives Rex Tillerson legal deniability: he gets away with insisting that he didn’t call Trump a “moron” because he actually called him a “fucking moron”. When Biden resorts to curses while securing votes for his economic stimulus, “the number of ‘fucks’ he uttered seemed to multiply as the story went from senator to senator”. Partisanship likewise signs its oaths in urine, so that Mitch McConnell declares his support for a Trump nominee to the supreme court by vowing: “I feel stronger about Kavanaugh than mule piss.” In Kentucky, which McConnell represents in the Senate, the micturition of mules appears to be proof positive of sincerity. It all sounds harmlessly infantile or at best adolescent until you realise that these men determine the fate of a nation and perhaps the future of our planet.

Their pretence of godliness founders when Steve Bannon, so zealously Catholic, decides to out-Herod Herod by suggesting that a campaign of lies about the election result will “kill the Biden presidency in the crib”. Yes, politics is murder by other means, and the deity, having long since retreated in despair or disgust, is not about to rescue us. The last fatalistic word should go to Biden, on an occasion when his rosary stayed in his pocket. Wrangling over the exit from Afghanistan, he tells his secretary of state: “Don’t compare me to the Almighty. Compare me to the alternative.” I’m unsure whether he meant Trump or the devil, but is there any difference?

Peril by Bob Woodward and Robert Costa is published by Simon & Schuster (£20). To support the Guardian and Observer order your copy at guardianbookshop.com. Delivery charges may apply

sloanbashinsky@yahoo.com
Posted by Sloan at 7:18 AM