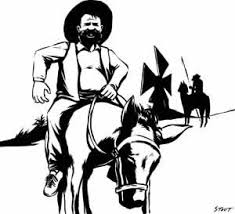 Waldo, I believe that's possible, but it would only work on those already predisposed... the brainwashing is not just limited to the Internet, Schools, The Media Churches, etc. all do the basic work that predisposes people to this type of influencing!


A true lover of wisdom has hands too busy to hold on to anything! He learns by doing and every pebble in the path becomes her teacher!  Oink

Please take a few minutes to watch this and then share it with your friends for info on the power influence of a few in Silicone Valley. 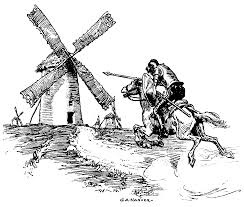 Don Quixote took the bait and opened the link and watched the video and replied to Sancho:

If Zuckerman only sends out "Go Vote" to Democrats on election day, is that illegal? Perhaps there is a Federal Communications Commission reg or U.S. law requiring Zuckerman to send it to all Facebook users?
Do you think the Republicans don't do the same with their own communications systems, just to Republicans? FOX News, mailing lists, etc.?
What I did not hear in what the left-wing psychologist testified, was just how Goggle goes about influencing elections through manipulating search engines?
Certainly, predisposed people are more likely to respond to such tactics by either side of the American political aisle, and by Russia, China, Iran, Israel, etc.
Witness the MAGAs. The Hillaryites. The Sandersites. The Warrenites. The Party above countryites.
I can imagine the Republicans are only concerned about how Democrats use the Internet to affect elections in America.
I bet, if Russia had mangled Donald Trump in 2016, instead of Hillary Clinton, and Hillary had won, the Democrats would be ignoring that and focusing on how the Republicans influence elections in America.

Sancho:
I think you're mixing two different things here... there is always going to be propaganda by political entities, but there is a good chance that you can easily identify it as such ... and no, I don't think it's illegal, maybe a little unfair due to it being undisclosed as in the case of FaceBook! What the "expert" was alluding to was about subliminal messaging and search algorithms that were biased in favor of Dems by Google! It took him years to decode, so he says, but he also said that whatever they were doing was virtually untraceable, so a kind of contradiction there!  Yahoo News is definitely left leaning and pretty much all the main "News" outlets are anti Trump.... that's hard to deny, but I think is more for the ratings than any real philosophical conviction! I think this Google and Facebook muscle flexing is a very dangerous tool because it can place so much power in the hands of whoever wields it!

Don Q:
Well, I still am totally fogged re how Google jimmies search engines to cause millions of votes for Hillary and Dem congressional candidates. Surely the psychologist should have provided at least one concrete example. Otherwise, how to tell it is any different than Facebook sending out Go Vote notices only to Democrats on election day?

I have read of Russia, China and Iran posting sneaky stuff in social media to sway Americans unawares.
Meanwhile, I don’t see Ted Cruz, the Republicans and Trump wringing their hands over Russia and Wikileaks getting Trump elected in 2016, after he invited Russia to help him, and he still still does it for 2020 election.
Sorta all looks to me like a convoluted version of 1984’s Big Brother, who has multiple personalities, which belong to opposing political/philosophical cyber “jihads”.

So many juicy conspiracies to chose from.... hmnnn!
Actually, you've come up with one of the best.... It was the Devil that done did this to us!  Who, moi?

Don Q:
Actually, the Devil is more than pleased to subliminally drive the Republicans and the Democrats, to keep things FUBAR. Until that is generally recognized and that the Devil does that to each person, regardless of religious/philosophical persuasion, or lack thereof, FUBAR will continue its reign. That was my takeaway from Marianne Williamsons' part of the 2nd Dem debate, although she did not mention the Devil specifically. Given what seems to be her New Age roots, she might not even believe the Devil actually exists. But she got all over that during the recent debate, and she hit the Dem Party with it, as well as the Repub Party, and it was long overdue.

Sancho:
Yeah, that would be a Hell of a Collusion Investigation... maybe Mueller can be persuaded to to give it a try? He would have to subpoena you for sure... are you sure you're ready for prime time?

Don Q:
I've been on prime time before. Wonder how prime time would cotton to a person who does not attend church and claims Jesus, Michael and Melchizedek own and boss and correct him, saying on national TV that nothing has changed since Jesus' time, Lucifer still dominates human beings, including Americans, and that's never going to be resolved by political parties, nor by churches, nor by governments, which, alas, are dominated by Lucifer. It will be interesting to watch the Democratic presidential candidates efforts to bring pressure on some of Lucifer's strongholds: the rich are not taxed proportionally; corporations have the same rights as people; big pharm; the health care industry; the military-industrial complex; guns; the destruction of the planet; the lack of separation of church and state. I'm confident the list is much longer, and you and everyone else I know could add to it. However, I don't think Robert Mueller is the right guy for that prosecution. The right guy is the guy Christendom, in the main, still tramples daily.

Sancho:
I have a different take, I think Jesus has given up on this place, we are on our own, brother! I am reminded right now of those parrots that pull all their feathers out until only the head plumage remains... all these crazy mass shootings remind me of that.....

Oh, Jesus is still around. He and Michael and Melchizedek and, I suppose, Gabriel, Raphael and Khamael, and other angels, are prodding the Democrat presidential candidates to put to America what is important, for Americans to buy into, or reject, in God's Courtroom.
Despite that doom and gloom, there is a lot going on in my personal life right now that is fun and even beautiful, and there is stuff that is not. I imagine many people can say the same.
I think in the Big Scheme, how humanity progresses spiritually, or not, is separate from how each person progresses, or not. Yet, how Americans respond to the Democratic candidates, indicates how they are progressing.

Sancho:
I've seem this movie before... Trump will get his second term, unless they shoot him, and the beatings and self flagellation will continue! Glad to hear you've had some positive things happening in your personal life... that's more important than any of this shit!!!
Peace!

Don Q:
Won't surprise me if Trump is reelected. Nor, that he then seeks to become president for life. Nor, that he declares martial law before 2020 election and suspends that election. He really does seem to long for Vladimir Putin's powers in Russia. An American civil war won't surprise me, if Trump loses. His core backers have heaps of guns, etc.
Yes, having fun might be the most important thing for me right now, although the angels keep pushing me hard in testy situations I mostly do not reveal in what I publish. I think the angels will never stop pushing me, as long as I have some of my wits about me and can speak and/or write. Maybe I should learn how to sign, just in case?
Oink!

sloanbashinsky@outlook.com
Posted by Sloan at 10:36 AM