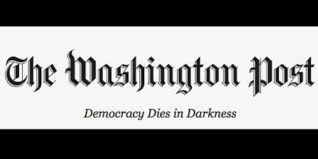 By John Wagner and
Felicia Sonmez
August 5 at 6:32 PM

President Trump urged the nation Monday to condemn bigotry and white supremacy after a pair of mass shootings and focused on combating mental illness over new gun-control measures in remarks delivered from the White House.
“In one voice, our nation must condemn racism, bigotry and white supremacy,” Trump said. “Hatred warps the mind, ravages the heart and devours the soul.” Better late than never, President Trump? Do you think the four black U.S. Congresswomen you told to go back to where they came from are convinced you are sincere? Do you think the victims of earlier American shooting massacres think you are sincere?
His nationally televised comments followed a weekend of carnage in El Paso and Dayton, Ohio, that left 31 people dead and scores wounded. The shooter in El Paso appears to have posted an anti-immigrant screed on an online message board, and authorities are seriously considering charging him with federal hate crimes.
Dee Margo, mayor of El Paso, said at a news conference later Monday that Trump will visit the city Wednesday and that he plans to meet with him.
“He is the president of the United States, so in that capacity, I will fulfill my obligation as mayor of El Paso,” Margo said. He suggested that some residents have been vocal in opposing a presidential visit, telling reporters, “I’m already getting the emails and the phone calls, and that’s why I’m saying what I’m saying now.”
From an August 6 New York Times fake news article:
The Democratic mayor of Dayton, Nan Whaley, said on Tuesday that she had been “disappointed” with Mr. Trump’s remarks the day before about the two massacres, which left a combined 31 people dead. In a brief speech, Mr. Trump denounced white nationalism and called for more action to address mental illness and to combat online hate, but endorsed only minimal new gun control measures.
Still, Ms. Whaley said, she would respectfully welcome the nation’s elected leader to her city.
“He’s the president of the United States,” Ms. Whaley said. “When he comes as president I will greet him. I hope he’s coming here to add value and to help our community, and I hope it’s not about just a press hit and I hope it’s about him actually doing something.”
On Monday morning, Trump condemned the “two evil attacks” and vowed to act “with urgent resolve.”He outlined a number of possible steps, including so-called “red-flag laws” that focus on better identifying mentally ill people who should not be allowed to purchase firearms.

Hours earlier, on Twitter, he called for “strong background checks” and suggested pairing gun legislation with new immigration laws, a top priority of his that he has failed to move through Congress. Trump did not elaborate on his call for stronger background checks during his televised remarks. Talk is cheap, action speaks. The NRA is not God. You should have gotten your Republican-controlled Congress to pass stiff background gun checks right after you were sworn in.

Trump made a similar call to strengthen background checks after a mass shooting last year at a Florida school, and has since threatened to veto bills passed by House Democrats seeking to do so. ??? Doublespeak, President Trump? You have multiple personalities?
In his tweets, Trump said: “Republicans and Democrats must come together and get strong background checks, perhaps marrying this legislation with desperately needed immigration reform. We must have something good, if not GREAT, come out of these two tragic events!” Domestic terrorism has nothing  to do with immigration from south of the border. Nothing good or great about these latest American terrorist massacres, which you, Congress, Homeland Security, the FBI and state and local law enforcement have proven impotent to prevent. As have existing federal and state laws. As have Christianity and other religions. I bet nearly all NRA members and domestic terrorists are religious.
How about you try this approach, President Trump? You say on National TV and in your tweets that anyone inclined to massacre human beings is possessed by Lucifer. And, anyone such as yourself, the US Congress, state legislatures and the NRA, who have power limit the nilly willy sale of guns in America to anyone who wants to have them, but does not exercise that power, is possessed by Lucifer.
sloanbashinsky@yahoo.com
Posted by Sloan at 9:03 AM