Sancho Panza to vote for The Dis-Ruptor-in-Chief again!, and related great disturbances in the Force 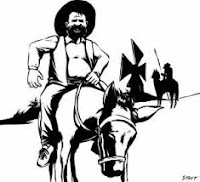 The indefatigable Sancho Panza, in "real life" a retired Lucent Technologies scientist and consultant, fluent in several languages, including Latin, dropped this below on Don Quixote yesterday:

Re: Everybody piles up on Trump for not going to war, yet give Obama Nobel piece price for starting regime change wars in Syria and Libya! WTF?

Hey, Sloan, haven't seen any missives from you lately, hope you're OK!
I was watching this video and I thought of you and how you've been sort of taking the side of the Democrats in Congress, even though you and I both know that they are as corrupt as the other side or even more so because they claim to be for the poor and oppressed(but are supported by and carry water for the rich and the elite) and because they have the entire fake media on their side as guardians of "justice", when all they are is a propaganda arm of the Status Quo!
I told you I voted for Trump in 2016 because I was hoping he would be the disruptor-in-chief and reveal how truly corrupt all these people in government are! Given what he's doing now by taking on both Dems and Neocons on this Middle East Mess, I am voting for Trump again and this time based on this issue of foreign interventions and his willingness to look out for the lives of our people first and to allow other countries to manage their own affairs as long as they do not affect us directly! This video is right on, IMO!
YouTube

Hi, fellow gadfly.
Well, what can I say?
A Key Westerly amigo recently tossed this at me, to which I cried out, "Oh, no!!!" 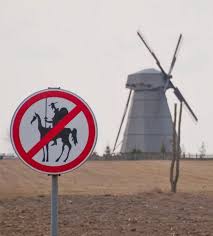 I am glad to see your pen is in perfect lyrical form and that you are doing what you love, writing! Hope this new book takes off and makes you rich and famous

Yeah, I don't agree with you at all about Trump, he's much  smarter than you give him credit and what drives him is not that different than what drives you, the difference is that he is a rhinoceros and you're a corvus senex!   Oink!

A friend told me a little while ago that Trump really didn't pull the US Military out of "Kurdistan", and before long Congress will have to fund keeping a thousand troops there. Call them advisers. That's what they were called leading up to the false flag Vietnam war.
I never said Trump is not smart, at least not in the IQ sense. Perhaps he has a very high IQ. He's also street smart. What he seems to lack is a moral compass, ability to see himself, regulate himself, be introspective, humble, have remorse. His vanity, need for applause, power, money and sex hunger, and addiction to spinning facts to suit his ego, drive him, based on what I have seen of him in videos and read his tweets and many news articles in which he was quoted. He's a terrible role model for American children. Looks to me he's still trying to prove himself to his father, or his mother, or both.
Glorify him in your own mind, if that makes you feel better. I'm glad I didn't vote for him, nor for Hillary Clinton, Barack Obama, G.W. Bush, John Kerry ... What drives Trump doesn't drive me. What drives me is trying to stay in the reasonably good graces of a band of angels I can't imagine Donald Trump, nor you, for that matter, nor anyone I know, other than my friend Young Prophet, would care to have anything to do with. I'm their pack donkey, and I suppose a crow, too, since I sure caw a lot about what the band of angels arrange for me to experience and rub up against. They arranged for you and I to cross paths, what, in 2002?
Ciao

Well, I am very happy I am not you or that "friend" of yours... and I am definitely glad I am not Trump or have anything to do with politics! Trump is pretty transparent, it doesn't take a genius to see what you see in him, especially when you yourself "know" the type from your own family tree of winners... the trouble I have is with those that claim to be something they are not, the hypocrites, wolves in sheep clothing, etc.........  our poor daughters, they'll have to figure it out... our time is more or less up... and gone!

My oft-beleaguered family tree did not rise to anything like Trump. If he is as transparent as you say, what does that say about his adoring MAGAs? What does that say about the Republican Party? Same applies to the Obama and Hillary adorers.
I agree, you and I are nearly past history, and it's the younger folks who face whatever the future holds. History says humanity is about the same as it always was. Just different variations, complicated by technological advances and many more people and a planet they are killing.
If someone like Jesus was not able to turn around humanity, in the main, certainly he did reach and still reaches a minority, what makes people think they or their organizations will make any real difference? Yet, and I believe this, it is important to keep trying to make a difference, including and most important, growing and changing personally. Trying to change the exterior world tends to avoid trying to change oneself.
What intrigues/puzzles me is, it makes no sense to kill the planet. Yet the people in power and the people under them, including you and me, are guilty of doing it. If the planet dies, and humanity along with it, how does even Lucifer gain from that? Shouldn't Lucifer be hollering, "Screw making America great again. Save the planet!"?
Meanwhile, my friend said the 50 and the 1,000 actually are slated to be deployed elsewhere, but where is not being told.

Automation, AI and perhaps Cold Fusion, LENR, will save Humanity, but I am not sure we have time! Here's some info on Cold Fusion if you're interested:
https://lenr-canr.org

I heard of cold fusion some years ago, wrote about it on my blogs not knowing much about it, nor do I after reading the introductory article the link you provided brings up with other articles.
All the hoopla I read online about ETs giving the US Government technology for war planes, why come the beneficiant aliens don't give the US Government cold fusion, or something that replaces making energy from fossil fuels and split atoms?
Surely the ETs have such technology, given they defy Einstein's hard rule that nothing travels faster than the speed of light.
Given all I read online about ETs mining this planet's natural resources and doing Dr. Mengele genetics on the planet's so-called dominant species, surely the ETs want to keep humanity and the planet alive and well?
But then, it seems your President Trump could care less than a tinker's damn about the planet being killed in plain view.

sloanbashinsky@yahoo.com
Posted by Sloan at 7:01 PM