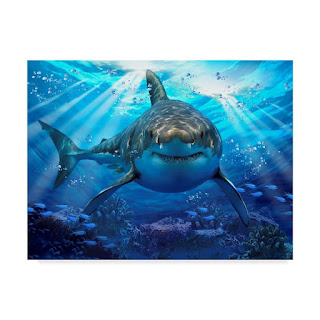 During a 2014 Key West mayor candidate forum broadcasted by Pirate Radio in Key West, I said visitors to Key West are not told that the ocean there is full of MRSA bacteria and is not safe to swim or dive in, if you have a nick or scrape on your skin. Key West native and Incumbent Mayor Craig Cates then said I was wrong, Key West waters are clean and beautiful.

During my time living in Key West and the Florida Keys, 2000-2018, I heard stories of offshore fishermen coming across large patches of food wastes and raw sewerage floating on the ocean.

The beaches in Key West and the rest of the Florida Keys often displayed warnings that the water was contaminated with fecal bacteria.

During a 2013 Key West Chamber of Commerce public forum I attended, the Chamber spokesperson, an M.D., said, "The dirtiest, worst possible cruise ships are calling on Key West."
The sea killer monsters people ride into Key West are not welcome by most people in Key West. Who welcomes them are Key West businesses that make money off them.
Cruise ship passengers and the super loud conch trains and trolleys they ride through quiet, peaceful Key West neighborhoods, are deeply resented by local residents.
Cruise ships top off their fresh water tanks in Key West with water piped down to Key West, which was drawn from sacred fresh water aquifers below Miami.
When cruise ship passengers re-board, they should go astern and watch what their sea monster does to the sea bottom when it turns around and leaves Key West. 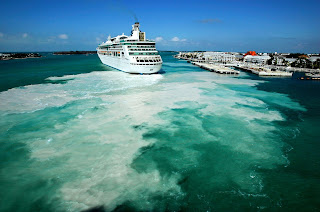 Cruise ship passengers should wonder about it not being wise to piss off Mother Nature.
After leaving Key West, cruise ship passengers should wonder why they were NOT TOLD by ship personnel BEFORE they disembarked at Key West, that the ocean there is FULL of MRSA flesh-eating bacteria. MRSA stands for methicillin-resistant staphylococcus aureus.
Facebook stopped letting me post photos of people with open MRSA abscesses, because the photos were too gory. I found the photos by Google-imaging "MRSA". 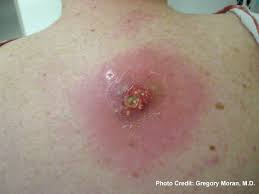 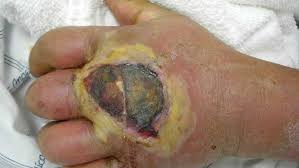 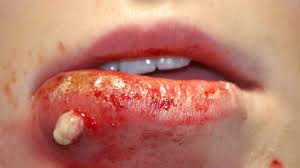 Let me tell you of my experiences with catching skin MRSA in Key West, in 2003.
In emergency surgery to save my life, a Key West surgeon carved two awful MRSA abscesses out of my pubic area and another out of my butt. When he came to my hospital room the next day, he said I could do anything I wanted to do but go into the ocean.
His medical partner later told me, after another horrible MRSA abscess rose up between my scrotum and my anus, that he was treating MRSA all the time, and he thought it might be contagious by touch. He and his partner wore surgical gloves when they treated me.
The doctor who had diagnosed me with the first three MRSA abscesses, Ian Garriques, MD., and referred me to the surgeon, washed his hands after each time he saw me.
An infectious disease expert, Dr. Garriques eventually told me that he had talked with doctors all over America, and medicine had no answer to skin MRSA.
Angels then saved me from MRSA.
I quit going into the ocean.
Dr. Garriques later had a letter to the editor published in the Key West Citizen, in which he said MRSA was pandemic in the Florida Keys.
From time to time, other doctors in Key West told me they treated skin MRSA all the time.
A friend, who liked to swim in the lagoon in front of his home on Summerland Key, caught MRSA on his face.
Professional divers told me that if they went into the ocean with a nick or scratch on their skin, say from shaving, they had a good chance of catching MRSA.
I published many times on my blogs that the ocean was full of MRSA and the risk of catching it if you have a nick or scratch on your skin.
In time, I learned of easy to make and/or find home remedies that cured skin MRSA, which I reported on my blogs from time to time. goodmorningkeywest.com and goodmorningfloridakeys.com (no longer available).
The remedies are:

(1) No bacteria can survive iodine. Acquire from a pharmacy a light-resistant bottle of red iodine and a small jar of petroleum jelly. Use a spoon or knife to remove a small scoop of the jelly from its container. Fill the resulting hole with the red iodine. Close the iodine bottle. Try not to get iodine on your fingers, because it will stain them brown. Use a toothpick or a thin knife to poke the jelly and red iodine until they merge and the concoction is deep pink throughout. Apply that concoction 3-4 times a day to the MRSA sore. After each use, make sure the container lid is closed tight and stored in a dark, cool place, because light and heat cause iodine to loose its efficiency.
(2) Acquire oil of oregano from a health food store or online, and apply that, also, a few times a day to the MRSA store.

I told tourists about MRSA and not to go into the ocean if they had a nick or scratch their skin.
I saw homeless people in Key West with gauze bandages on their arms or legs, which meant they had MRSA. The homeless shelter on Stock Island required MRSA sores to be covered.
If MRSA can be passed by touch, then is it smart in Key West to sit on public benches, touch hand rails, ride public transportation, sit on public toilets?
A friend, who had lived on Cudjoe Key, told me the other day that she and her son went to Key West last year, and went diving, and they both caught MRSA.
If you come to Key West on a cruise ship, and you have six or so hours to kill, perhaps you should stay out of the ocean?
If you come to Key West by land or air, or by your own boat, perhaps you should stay out of the ocean?
If you went into the ocean in Key West or elsewhere in the Florida Keys and now have skin MRSA, acquire and apply the home remedies described above.
Beyond your personal safety and welfare, If you love Mother Nature, how can you get onto a cruise ship?
Consider that in 2021, Key West voters passed three referendums by more than 60 percent to:

* Limit the number of people disembarking from cruise ships to 1,500 a day

* Limit the capacity of ships that can call at Key West to 1,300 people

* Give priority to ships with the best environmental and health safety records.

“cleaner” was to be measured two ways:

* By a ship’s scores by the Vessel Sanitation Program from the Centers for Disease Control.

* By its records of environmental violations.

If you love Mother Nature, consider cruise ship-dependent businesses in Key West lobbied Republican state legislators, who lived on the Florida mainland, to introduce a bill in the Florida Legislature to override the Key West cruise ship referendums. Unable to get the bill passed, those Republican legislators attached it to an unrelated measure that the Republican-controlled state legislature passed, and then it was signed into law by self-proclaimed pro-environment Republican Governor Ron DeSantis, despite for decades Republican and Democrat Florida legislators and governors had designated Key West and the Florida Keys as areas of critical environmental concern.
It was my observation in Key West and the Florida Keys, that money trumped Mother Nature every time.
By 2010, my love affair with the Florida Keys had ended, evidenced by I did not weep when I left the Keys and when I came back. Living in the Florida Keys and Key West had become a grim job in what felt to me like a sewer that could be likened to MRSA.
By 2015, every time I saw a man o' war bird in Key West, I knew I soon would be spiritually attacked and/or would engage in spiritual warfare. 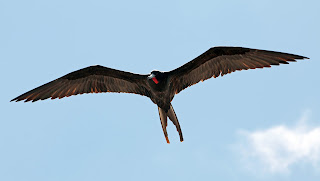 sloanbashinsky@yahoo.com
Posted by Sloan at 8:22 AM