pursuit of happiness on the Lolita Express 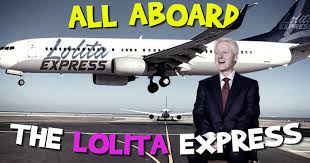 A spot-on Facebook response to the recent Thanks to fake news Miami Herald and New York Times, maybe Donald Trump and Bill Clinton will do maximum security time with Jeffrey Epstein? post at this fool's errand blog:

David Patten You're right ... what is the big deal about having sex with teenagers .. think ... pursuit of happiness

Gloria ReiserJuly 13, 2019 at 11:50 AM
So maximum of 5 years, for giving up names of those who "paid" for sex with underage girls?!? What about those he treated to those adventure trips, or those who skirted paying directly? It appears Epstein and others will still be getting off easy... and some may slide through still totally unscathed.
Found this below in my Facebook timeline this morning, posted by a British ex-pat living in America, whom I met in Key West when he was one of the educated and interesting motorized gang of what I called "vicious van dweller criminals, who dared to live in their homes on wheels, instead of in the city's homeless shelter, on a boat, in a trailer, apartment, house, motel or hotel room, in pursuit of happiness:

John Cleese:
My American friends are asking me about President Trumps’s observation that the British ‘like him’
I regret this is quite unfounded
The explanation for this canard is that Trump is pronoid
Pronoid is the opposite of paranoid. A paranoid person thinks, without any basis in reality, that everybody is out to get them. A pronoid person is someone who thinks, without any basis in reality, that everybody likes them
The fact is that the British loathe Donald Trump
This is because he is the polar opposite of a ‘ Gentleman ‘, who has qualities the British admire. A fine example is Gareth Southgate
To the British, a ‘ Gentleman ' is a man who is modest, well-mannered, self deprecating, quietly intelligent, considerate of other people’s feeling, and well-informed.
He is not vulgar, inflated, vain, boastful, noisily ignorant, sleazy and common as muck
I hope this clears up any confusion:
Just in case you Might Still have anyDoubts: https://jobsanger.blogspot.com/…/british-writer-pens-best-d…

Excerpts from another of many "fake news" pursuit of happiness online offerings:https://www.scmp.com/news/world/united-states-canada/article/3017830/lolita-express-and-famous-friends-jeffrey-epstein

‘Lolita Express’ and the famous friends of Jeffrey Epstein, US billionaire charged with molesting dozens of girls

Bloomberg
Published: 1:55pm, 9 Jul, 2019
To be sure, Epstein’s contact list includes many prominent people, both men and women, who are fixtures in the celebrity party scene.
The black book contains more than 1,000 names, ranging from close friends like Wexner to peripheral contacts from the worlds of politics, business, the media and European high society.
The UK’s Prince Andrew and members of the Trump family make appearances. There’s even an entry for the main number to the White House.
The names include well-known performers, including Ralph Fiennes, Alec Baldwin, David Blaine, Jimmy Buffett and Courtney Love; media figures including Charlie Rose, Mike Wallace and Barbara Walters; former Israeli prime minister Ehud Barak, former British prime minister Tony Blair, industrialist David Koch and the late Salomon Brothers Chief Executive Officer John Gutfreund and his wife, Susan.
Frenkel said the case could develop much like the
US college admissions scandal
, in which a number of wealthy parents have been charged with paying bribes to get their children into top-tier colleges. More than a dozen have pleaded guilty.
“Once the key witnesses flip, including the victims, the potential is there for other participants to be implicated directly,” he said.
“That could be a veiled message in the US attorney’s invitation to decide early whether to hunker down or come forward and get credit or acknowledgement for cooperation to avoid indictment.”
On Monday, Manhattan US Attorney Geoffrey Berman pleaded for people to come forward with any information about Epstein’s conduct.
In his most extensive known public comments about Epstein, Donald Trump told New York magazine in 2002 that he’d known the financier for 15 years and praised him as a “terrific guy”.
“He’s a lot of fun to be with,” Trump was quoted as saying.
“It is even said that he likes beautiful women as much as I do, and many of them are on the younger side. No doubt about it – Jeffrey enjoys his social life.”
Trump Organisation attorney Alan Garten has since distanced Trump from Epstein, telling Politico in 2017 that Trump “had no relationship with Mr Epstein and had no knowledge whatsoever of his conduct”.
Asked about the charges on Sunday, Trump said: “I don’t know about it”.
Epstein was also an associate of Bill Clinton, repeatedly lending the former president his jet to travel overseas.
A spokesman for Clinton on Monday said the former president was completely unaware of Epstein’s “terrible crimes” and hasn’t spoken to the ultrawealthy sex offender in “well over a decade”.
sloanbashinsky@yahoo.com