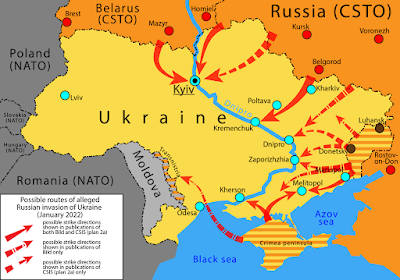 From American Historian Heather Cox Richardson, a tried and true Democrat, whose views I often appreciate, and sometimes I think she needs to broaden her perspective. Likewise, Democrats, Republicans, MAGAs, Independents, etc.

Letters From an American

February 27, 2022
Heather Cox Richardson
Southern novelist William Faulkner’s famous line saying “The past is never dead. It’s not even past,” is usually interpreted as a reflection on how the evils of our history continue to shape the present. But Faulkner also argued, equally accurately, that the past is “not even past” because what happens in the present changes the way we remember the past.
Russia’s attack on Ukraine and the defiant and heroic response of the people of Ukraine to that new invasion are changing the way we remember the past ...

Sloan Bashinsky
I have seen several news articles that Congressional Republicans wanted harsh sanctions imposed against Russia before the invasion of Ukraine, to try to prevent a repeat of Russia taking part of Ukraine and Georgia some years ago, and the U.S. and the west did nothing. Yet, President Biden and Congressional Democrats did not want to impose harsh sanctions before Russia invaded Ukraine this time. So far, I don't recall Heather covering that part of the past that is the present. Here is a link to a February 24, 2022 CNN article I found just now.
https://www.cnn.com/2022/02/24/politics/congress-reaction-ukraine-invasion-republicans/index.html

Beth
Gee, wonder what happened to these promises from GOP senators??? Guess we could blame it on McCain for dying before they got it done.
https://www.youtube.com/watch?v=nKnA6Y8GpbM

Sloan Bashinsky
G.W. Bush was president when Russia invaded Georgia in 2008 and America did little to nothing. Barack Obama was president when Belarus and Russia took bites out of Ukraine in 2014 and America did little to nothing. And here we are, the past in the present, and Joe Biden is president, and he waited for Russia to invade Ukraine before he did anything more than talk. These are facts, regardless of which side tries to spin them. I'm fed up with both sides in America pointing the finger at the other side for everything awry. I feel totally disenfranchised by both the Democrats and the Republicans. Have felt that way a long time. I belong to no political party, view them as, well, cults.

Kathleen
Thank you Sloan - no sound on the video for me ... no doubt, he will take credit for any positive outcomes and slather blame onto others for any detriment ... and the mindless, All-American, all-consuming, commodified puffed up populace will eat it up like cotton candy at a country fair ... proof that yes, indeed, god does in fact love everyone ...? Snacks ...?

Sloan Bashinsky
The video with sound is playing for me right now. I don't know the forum, but it's a large table with lots of people around it, and Trump is warning about Western Europe buying energy from Russia. The host of the video, perhaps a Trumper, she seems of India or Pakistan origin and has British accent, also is commenting between clips of Trump speaking. I am not a Trumper, I detest the man. I am not a Republican. I am not a Democrat. I belong to no political party. I weary of the left and the right blaming the other sider for everything. Putin was indeed brilliant to get Western Europe hooked on Russia's oil and natural gas. Who's to say he was planning to take back Ukraine all along, but first he had to get leverage over Western Europe, and he also needed to work out something with Red China. I pushed in comments here in the past few days that Russia's oil and natural gas pipe lines to the west, south and east are Russia' Achilles heel, and if they were knocked out, Putin thought they were going to be knocked out, then maybe Putin would be a bit more hesitant and less arrogant and so forth.

Kathleen
Ah, I found you!! This blog gets all jammed up after a couple of hours - really hard to follow any conversation ... yes, I hear you ... I get visual - no audio ... we are pretty much on the same page .... This may be a good time to push for alternatives to fossil fuels in a big way ... have you heard of this?
SolarWindow Technologies Inc. (OTCBB: WNDW)
https://www.solarwindow.com
https://uploads.solarwindow.com/wp-content/uploads/2021/08/09160612/SW-Investor-Environmental-Sustainability-08032021_reduced.pdf
Check it out - I think it could solve a lot of problems in the energy field - just have to get past the interest groups focused on more and more money and profits - though it probably would be a good investment if it takes off ...
And check this out ... speaking of playing both sides ... earlier, I posted a letter from Teri Kanefield about the dynamics of today's geo-political dance:
https://terikanefield.com/the-renewed-relevance-of-the-great-fox-trump-putin-love-affair/
MaryPat posted this in response:
"[Tucker] Carlson did an about-face so fast you’d think he would have gotten whiplash. He said: 'It’s a tragedy, because war always is a tragedy, and the closer you get to it, the more horrifying it seems. Vladimir Putin started this war, so whatever the context of the decision that he made, he did it. He fired the first shots. He is to blame for what we’re seeing tonight in Ukraine.'
Jaw dropping.
Hey Sloan, best wishes and peace to you!!
ka

Sloan Bashinsky
I lived in Key West much of 2000-2018. Ran a few times for city and county commissions. There was no interest in the commissions for going all out toward solar. Key West had city ordinances banning solar panels on roofs, in front yards - unsightly, bad for tourism, historical preservation ambience. There is a public electric company that serves the upper Florida Keys, and a different public electric company that serves the lower Keys, including Key West. Their power generating plants are on the mainland, below Miami. Their joint public water purification planet is there. They pull water from an aquifer, and they have a desaline plant that removes salt from brackish water, and the two are blended and they send it through a pipe all the way down to Key West, which sells the water to cruise ships headed into the Caribbean. You'd think the lower Keys and Key West would want to be self sufficient for water, power, and in olden times they were. There is a large aquifer under the knoll on Key West, where locals once got their drinking water, but now that water is contaminated. There were rain catch cisterns all over Key West. Many islands had cisterns and fresh water aquifers. All no longer in use except a couple of remote islands. I simply use this as an example of the resistance to America going solar, for example. Perhaps someday science will figure out how to generate power from water. Meanwhile, it may be a race between humans destroying the planet and themselves, and wars doing it.