I wonder how long it will take Donald Trump to look in a mirror and get down on his knees and tell God January 6, 2021 was a really bad idea, and beg for forgiveness? 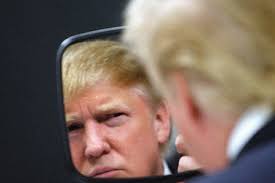 Last night, the Alabama football team met its match, and then some. In the Crimson Tide's defense, it's top receivers were injured and out of the game. But my goodness, did the Georgia Bulldogs hang tough for three quarters and then blow the Tide away in the 4th quarter. I imagine the Bulldogs had had long very tough looks in the mirror after being favored and getting blown out by the Tide in the SEC Championship game at the end of the 2021 season.

I posted this below in an online spirituality forum, and got some nibbles.

One way to starve the Devil and its legions: a course in mirrors
I've had many conversations with people who deny the Devil exists and/or have their own view that relegates the Devil to something less ominous than portrayed by Jesus in the Gospels.
I don't see Lucifer and its legions standing people in front of endless mirrors and telling them to do something about the beams in our own eyes, and in that Jesus way move closer to God (Source) and less tasty to Lucifer and its legions.
Angels in sync with God (Source) feed on that energy. Cut off from that energy, Lucifer and other fallen angels and demons feed on lost and incarnated souls, and do what they can to stir up strife and its emotions, which provide more energy for them to feed on.

T
"Lucifer and other fallen angels and demons feed on lost and incarnated souls, and do what they can to stir up strife and its emotions, which provide more energy for them to feed on."

"I don't believe this to be truth."

Me
Cut off from God (Source), what do those supernatural beings "eat"?

T
Do you not hear yourself ?
Source is source of everything. Even those demons and bad spirits came from the same Source. And there is no way ANYTHING in this universe can disconnect from the Source. Its just not possible.

Me
That is true, but they disconnected from the God energy and when and if they return to it is up to them. I have wondered if the parable of the prodigal son is about the eventual return of Lucifer to God, and the unhappy older brother is the angels who did not leave God?

P (who elsewhere told me about being raised in a Satanic cult and escaped and still is escaping)
Lucifer doesn't empower but twists our view of empowerment and tricks our perception of self. He feeds from our suffering and that's why healing is so important. We each deserve to heal and with so many spiritual motivators, it seems like the most obvious choice but the devil is extremely good at dragging us into the usefulness of our suffering. The contagion of unity with other's in misery.
It's going to need to be an authentic healing or it will crumble to dust. Lucifer and his deception is very real. Angels of God promise us they will be there when we call on them for help in the sincerity of our hearts. The angels and their further sight than our own, can show us what we really needed all along and truly were desiring.

Me
That is my experience also, but the angels who came my way were very big on the mirror treatment, and I can tell you that treatment isn't a whole heap of fun, and there are variations of it, and just when I think I'm done with it, there is another variation - endless mirrors, in which I am the subject, the predicate, the antecedent, etc.
As for empowerment, a very powerful demon enhance Adolph Hitler, after he spent time around a relic - spear - in an Austrian museum, which was known to trigger metaphysical/spiritual energy. After the demon enhance Hitler, it enhanced his top aides. And from there, the demon infiltrated much of the German population. A book was written about that, and about Hitler's counterpart, who used the spear's energy to go toward God, and the was advising the Allied Command about what he was picking up astrally from Hitler and his top aides. The Spear of Destiny, by Trevor Ravenscroft.
Imagine the feeding spree Nazi Germany provided that demon.

P
The mirrors are fully necessary. Never done as long as growing. You can choose to be done, but it requires way more in my opinion to be done. Well that speaks to how endless we are that the mirrors are too endless for our experiencing ourselves and knowing. Can't really heal anyone authentically with stuff hidden in us unaddressed or unknown about. Resistance makes it worse.

Me
So far, you are the only responder here, who addressed the mirror "therapy". I understand we can do it while we are here on earth, or we do it later, to the extent we didn't do it here.

P
That makes sense actually, I don't think many willingly sign up for the mirror treatments. I know I didn't. I used to pass out from them and sleep was my therapy. I eventually grew a tolerance to being awake during. :) Now, I more willingly dive into the mirrors and only sometimes am too much afraid while I am always relieved afterwards, sometimes, I do set boundary I can't do the mirrors right then. Which, as it turns out, is part of my learning to be setting boundaries with beings.
Yes, further learning and training can come to us not during just our earthly quarter, I do believe so.

Me
I told someone elsewhere in this forum:
"I wonder how long it will take Donald Trump, for example, to get down on his knees and tell God January 6, 2021 was a really bad idea, and beg for forgiveness? Of course, God is interested in the repentance, and humans are wanting the forgiveness, which is an illusion, according to A Course in Miracles, as God never stops loving, but does allow people, angels, to go to hell, if that is what they want to do. The return to God for such souls, and for anyone, entails long hard looks in the mirror, which is an essential part of soul alchemy/spiritual evolution."