$48,000 arteriogram hospital bill: want to know how I feel about people who want to do away with Obamacare and Medicare? 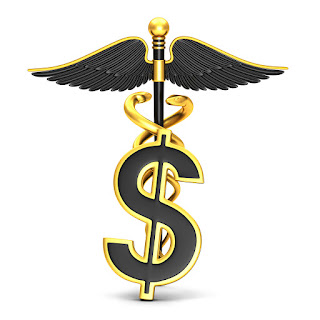 The other day brought a text from an out of state medical billing service about an unpaid bill I had never received. I called and finally got a human, who told me the bill was for a St. Vincent's Hospital procedure, the unpaid amount was $775.

I said, yes, I was in that hospital for a procedure, but I had never received a bill. It was mailed to me, the human said. I never received it, I said. The human asked if I will I pay with a credit card? Not a chance I give someone I don't know my credit card on the phone, I said.

The human said they have payment plans if I can't pay the full amount. If I don't pay something now, it goes against my credit. I said I can pay the full amount, but I'm not giving  my credit card to someone I don't know for a bill I never received. I'll go by the hospital and see what I can learn there.

I found my way to the business office and there was no waiting line. I told a pleasant woman behind the glass that I was being dunned and threatened by texts from an out of state medical collection agency for not paying a bill I never received.

She got my name and date of birth and looked up my account. She said it was for the arteriogram last January, $48,000 and some change.

She confirmed the amount, said Medicare had paid $1,800 and had allowed the hospital to bill me $775.

I had gotted there at 7 a.m. with my older daughter, as they required I be accompanied and driven home after the procedure, which occurred about 10 a.m., under what is called "twilight sleep". After I woke up, the cardiologist came by and said my arteries were fine, the EKG and stress tests showing abnormalities in the left side of my heart were false positives. They let me leave about 2 p.m.

Do the nuns know about this?, I asked

The nuns aren't here any more, the pleasant woman said.

I gave her my credit card and she ran it and gave it back to me.

A few hours after leaving St. Vincent's I had dinner with an attorney friend who represents some physicians in a huge class action lawsuit against Blue Cross Blue Shield of Alabama and its national parent company. He was astounded over the $48,000 bill for the arteriogram.

He said the gist of the lawsuit is Blue Cross Blue Shield had made great gob$$$$ of billion$$$$ by reducing patients' benefits and raising their premium$$$$, and by paying doctor providers less and not letting them treat patients covered by other medical insurance providers if they wanted to keep doing business with BlueCross BlueShield, which controlled about 95 percent of the medical insurance market in Alabama, and it was similar outside Alabama.

The day before, by chance, if you believe in such, I was hailed by someone I once knew pretty well, who had worked for Blue Cross Blue Shield of Alabama. He was in their computer department. We got caught up, agreed to get together later for a meal. I called him yesterday and reported what the lawyer had told me. He said he had heard similar about the class action. He, too, was astounded over the $48,000 bill for the arteriogram.

This morning, I saw online that the Trump-packed U.S. Supreme Court had just ruled against the 3rd Trump/Republican lawsuit to end the Affordable Care Act (Obamacare), which is not available to Medicare patients.

Without Medicare, I would not have been able to afford the arteriogram and a lot more medical treatment I received this year. I wondered how 30-something million Americans covered by Obama Care would get by if Trump and Republicans were allowed to have their way? I wondered how they sleep nights?

This morning, I looked at my bill for radiation treatment for prostate cancer this past February and March, 28 treatments in all.

I went in, laid down on a table under the Cat scan-like device. Two medical techs lined up my body just right left the room. The device came on and moved over my pelvis and sent a tight proton beam at my pelvis for maybe3 minutes, and then the device shifted a little to the right and repeated that. The techs came in and helped me sit up and I got up and left.

For that I was charged each visit, $500 for "Guidance of Localization of Target" and $2000 for "intensity modulated radiation deliver treatment", for which Medicare paid and I was billed less than $100.

Wonder what that medical clinic bill would have been paid if Blue Cross Blue Shield was my medical provider?

Want to know how I feel about people who want to do away with Obamacare and Medicare?

Want to know how I feel about health care costing far more in America than in any other country?