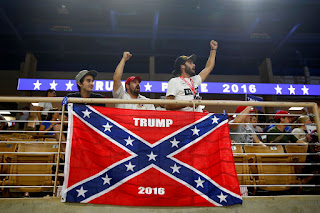 A Key West amigo responded to the Confederate Flag part of  yesterday's Will Joe Biden ever wake up and use Trump's playbook against Trump? post at this blog:

Sloan, I sincerely hope you would try to explain to a northerner like me, with no dog in the confederate flag hunt, why you support its continued relevance.  You are mostly a wise and compassionate man.  I'm not arguing against you, I just have never heard the good parts of the confederate cause, and you are the only person I know who I could hope to explain what they are.  Thanks for your continued writing (or should I be thanking your never-retiring Angels),

Hi, Rick - I cover what my dreams steer me toward. For several decades, angels have choreographed my dreams. Each blog post is the result of such dreams.
My blog post yesterday reported this from Peggy Butler about the Confederate Flag:
Doesn't matter how many love it, if it's true that it stands for something most Americans are long past, Sloan.
I replied to Peggy:
Gosh, Peggy. It doesn't matter how many love the Confederate flag? Are you serious? How do you think Trump got elected in 2016? Who do you think they will vote for this year?While the Republican Party is home for white supremacists, rednecks and states rightists, for whom the Confederate flag is probably as or more important than the American Flag, you want to tell me about your NASCAR history?
Looked to me Peggy simply does not grasp what really is going on.
Looked to me Biden really needed to get onto Trump about being the white supremacists' president.
As if Heaven was listening, something truly interesting swam into my Facebook timeline after I published yesterday's post, to which you responded. I imagine Republican Senator Lindsay Graham and President Trump were tickled pink to watch and hear Graham praising Joe Biden to high heaven, literally, in 2015, and slamming Trump into white religious bigot hell, literally. The youtubes of Graham doing just that are priceless.
I re-posted it on Facebook with some excerpts from the article, opening which takes you to the youtubes as well.

Excerpts: re new ad from Republicans Against Trump:

Sen. Lindsey Graham (R-S.C.) gushes in a new Republican ad that former Vice President Joe Biden is “as good a man as God ever created” — while President Donald Trump is a “xenophobic, race-baiting, religious bigot.”
What a difference an administration makes. The comments were pulled from Graham’s past, “before he lost his conscience” and became one of the president’s staunchest defenders, noted a statement from the Republican Voters Against Trump.
“You want to know how to make America great again?” Graham asked in 2015. “Tell Donald Trump to go to hell.”
The ad backing Trump’s Democratic presidential rival features a very different Graham. It will run on Fox News in the Charlotte and Greenville markets, reaching both South Carolina and the swing state of North Carolina. It will also air on Fox News in Washington, D.C.
The old Graham “lays out in explicit terms just how clear the choice is in this election, and why Joe Biden is suited to unite the country,” said RVAT spokesperson Sarah Longwell. “Joe Biden has the empathy and proven experience to reach across the aisle and work with people” — even Lindsey Graham.
https://www.yahoo.com/huffpost/republicans-against-trump-lindsey-graham-joe-biden-050109341.html?soc_src=social-sh&soc_trk=fb

YAHOO.COM
Lindsey Graham In New Ad: 'Joe Biden Is As Good A Man As God Ever Created'
Senator's old comments come back to haunt latest video by Republican Voters Against Trump.


sloanbashinsky@yahoo.com
Posted by Sloan at 10:52 AM