For about a hour on the phone, I gave her a tour that touched many bases, most of which seemed brand new to her. She did not know the City of Key West chose to build a very large and expensive dog park on Truman Waterfront, instead of hundreds of new affordable based-on-income rental housing units managed by The Housing Authority.

Maybe I convinced her there really is no cure for the affordable crisis that caused many several-generation Conchs to move to the mainland and leaves all but the wealthy residents of paradise stressed trying to make ends meet.

Toward the end of our conversation, I said  perhaps what she really might be called to do is to write about the changes that brought paradise to where it is today. Not much like when my father bought a 4-bedroom home and a 2-bedroom guest house on two lots on the Atlantic Ocean at Mile Marker 76 for $60,000, in 1963.

I said she had standing to write about how the Florida Keys and Key West changed. Perhaps she might call it, "The Death of Paradise, by a 5th-generation Key West Conch".

I told her a little about my new book, A SOUTHERN LAWYER WHO BECAME A MYSTIC, very little of which is about my time in Key West and the Florida Keys, and it gets progressively more woo woo. She said she likes woo woo.

About a week ago, a younger amiga in north Georgia called to say she dreamed the night before that she was watching Jesus from behind as he spoke to people. He was wearing a white robe. He turned around and was a younger me in a white robe, my hair was brown and I had no beard.

A few days later, I drove to Mississippi, to visit my older daughter and her husband for a few days. I noticed the photo below on a table with other family photos in their living room. The photo was taken in 1990, outside my home in Boulder, Colorado. I was going on 48. 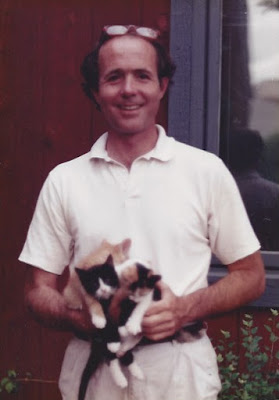 My daughter scanned the photo and emailed it to me. I forwarded it to my amiga in north Georgia, who texted back that it was the me in her dream! I called her and told her that was the year THE HIGH LEGAL ROAD: A New Approach to Legal Problems was published.

That was my first book about applying God's laws to human events. The book took me about two years to write. There were many drafts. The angels, posing as my editorial board, took my personal inventory ongoing. My entire way of looking at and approaching life was permanently altered.

The next year I wrote the sequel, PRISONS & FREEDOM, which was somewhat steeper in the personal inventory sense.

How those two books came about and some people I met during that time of soul-awakening is described in the first two chapters of Part Two, LAW & SPIRIT, of A SOUTHERN LAWYER WHO BECAME A MYSTIC. The rest of Part Two is flashbacks to my sometimes amusing, sometimes agonizing matriculation at the University of Alabama School of Law, in Tuscaloosa.

Part One is about 6 remarkable Alabama people who influenced me during my formative years. Part Three is about soul alchemy and is woo woo-squared. I suppose the book really is about paradise lost and found, or found and lost.

A SOUTHERN LAWYER WHO BECAME A MYSTIC was published last month by Absolutely Amazing Books in Key West. I learned of that publishing company from Key West author friends, when I lived there. Maybe some day I will write a book about how paradise changed?

A Southern Lawyer Who Became a Mystic