Looks to me Lucifer is delighted with how America is progressing 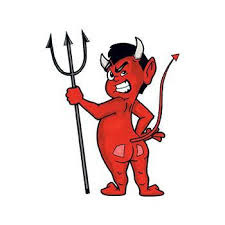 The lead into a fake-news NY Times op-ed yesterday, my for what they are worth or not fake thoughts in bold:

The Vote Is Over. Let the Contest Begin.

President Trump hailed his acquittal in the Senate impeachment trial as vindication, but the struggle now moves back to the House, the campaign trail and, ultimately, the voters.
By Peter Baker
·         Published Feb. 5, 2020Updated Feb. 6, 2020, 12:06 a.m. ET

President Trump’s acquittal on Wednesday after a fiery three-week Senate impeachment trial provided him a moment of triumph, a sense of validation, a shot of momentum — anything but the finality that he might want. The president who vowed to bring an end to endless wars overseas remains at the center of an endless war at home, one that now moves to the campaign trail and will not be resolved until November at the earliest. Sarcasm noted, Trump fueled the endless wars overseas and at home.

Rather than reaching out to bind the wounds, as President Bill Clinton did after his own Senate impeachment trial in 1999, Mr. Trump made clear minutes after the final roll call that he planned to go on the offensive. He opted to wait until Thursday to make a public appearance, on the advice of aides concerned about complicating the lives of Republicans who cast tough votes for him, but his Twitter feed and staff statements taunted his opponents and boasted of the “Country’s VICTORY on the Impeachment Hoax!” Evil prevails when good men and women do nothing.

Nor was the other side ready to surrender. Deflated by the nearly party-line vote, House Democrats took heart in winning over one Republican, Senator Mitt Romney of Utah, and quickly signaled that they would continue their investigations into the president. Representative Jerrold Nadler of New York, the chairman of the House Judiciary Committee, said he was now “likely” to subpoena John R. Bolton, the president’s former national security adviser, whose offer to testify in the Senate was rejected by the Republican majority. The Democrats in the House of Representatives surrendered when they did not subpoena John Bolten and other key witnesses, and resolve that in the courts if required. That the Democrats did not do that left the door wide open for the Republicans in the Senate, except for Mitt Romney, to do exactly what they did. Looks to me Romney is the only Republican in the U.S. Congress who is not possessed by Lucifer. Looks to me Lucifer loves the Democrats in the House of Representatives, too. The Democrats generally look to me like a confederacy of quarreling children. The national debt is at an all-time high and rising. Looks to me Lucifer is delighted with how America is progressing.

Feb 13, 2019 - The U.S. government's public debt is now more than $22 trillion — the highest it has ever been. The Treasury Department data comes as tax revenue has fallen and federal spending continues to rise...