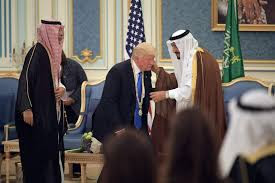 In early 2017, I was approached out of the blue online by a fellow nearly half my age, who said he was getting beaten up by angels to get in touch with me. Thus, began our friendship and my calling him “Young Prophet", or “YP”, after  he became a receiver of ongoing waking, sleeping and visionary visits from a cabal of angels he and I came to call “The Powers That Be.” Or simply, TPTB: Archangels Michael, Gabriel, Raphael, battle angel Khamael and Melchizedek. For many years prior, I was besieged by Jesus, Michael and Melchizedek.

About six months ago, I was told in my sleep by a familiar voice that I am Young Prophet’s John the Baptist. In the Gospels, John the Baptist heralded the arrival of Jesus. YP and I belong to no political party. We didn't like Hillary Clinton or Donald Trump in 2016. We wish President Trump and the members of Congress and Americans generally could enjoy what we experience ongoing with TPTB.

Had a dream asking me: Was it not crazy Barry Goldwater who wrote Conscience of a Conservative? At least Mitt Romney has a conscience. Could I say that for any other Democrat or Republican call them liberal, moderate or conservatives? The species is headed for a calamity.

TPTB recommend that you can treat this election like a game you're coaching. That's the game. Coach by talking about how the Democratic Party can position themselves to put a candidate forward to win, or split the vote such that the House decides the presidency and picks ANYBODY BUT TRUMP. At this point can we do worse?

Hard to imagine Dems get their act together on their own. I say, again, Dems pick a man and a woman ticket, or a two-woman ticket, a lefty and a centrist, and those two pre-pick all the other Dem candidates as their inner circle: Cabinet, Chief of Staff, National Security Adviser, Spiritual Adviser, etc., and that lineup is widely broadcasted. That should unify the Democrats and attract Independents and Libertarians, and perhaps fed-up-with-Trump Republicans represented by Mitt Romney, Bill Weld, Gary Johnson, etc.

I think Trump and U.S. law enforcement and intelligence agencies will beat up Joe Biden over his son's Ukraine dealings aided by his Vice President father.

Perhaps the Dem ticket promises on their lives and souls to get America out of foreign wars immediately after being elected, and to do all in their power to put poor Americans and Mother Earth at the top of their protection list.

Perhaps the Green Party and Ralph Nader endorse such a Dem ticket, given how the U.S. Supreme Court gave U.S. corporations much the same rights U.S. Citizens have under the U.S. Constitution, and given President Trump views Mother Nature and Iraq and Afghanistan, and most everything as capital assets ripe for harvest until hell freezes over. And given Trump's fiscal policy is making a great deal of money for himself and his family.

If I were running Dem public relations, I would keep posting online that Trump is indebted to Russia for its help in 2016, and to Saudi Arabia for bailing him out of debt. I would paste this photo online, ongoing.

As for who could be worse than Trump? How about Hillary Clinton? How about Vice President Mike Pence, who views merger of church and state as God-ordained. Mitt Romney decided to put God ahead of the Republican Party and its president, who is not a Republican but is a Profiteer. As for Trump's God, well, it's Trump! His evangelical horde have made him their God, despite "Thou shalt not have any other gods before me." Consider this article I heard about yesterday.

It's unlikely the Democratic speaker of the House is praying for Trump's political success, or his personal glory, so you can understand the president's confusion. His spiritual advisers veer toward the offshoot of Christianity known colloquially as the Prosperity Gospel, which preaches that good things come to those who pray. That is one form of prayer. But at least in the Catholic tradition from which Pelosi comes, you also pray for your enemies and your rivals. You pray for them especially. You pray for their soul, that they change their behavior and allow God to change their hearts before they meet their final justice.

Praying for people you hate or even merely dislike is hard. Trump said as much in his remarks Thursday at the National Prayer Breakfast, in an otherwise unholy speech The Washington Post's Michael Gerson dubbed "Trump's sermon at the Hilton." But the rest of his comments border on heretical, because they showed once again that Trump puts fealty to God beneath fealty to Trump.
Pelosi has drawn Trump's ire before by saying that she prays for him. He doesn't "like people who say, 'I'll pray for you,' when I know that is not so," Trump said. Later, celebrating in the White House, he said he doubted Pelosi "prays at all."

But perhaps more telling was Trump's salvo at Sen. Mitt Romney (R-Utah), from all accounts a pious man, who cited his "profoundly religious" beliefs in explaining why he voted to convict Trump for abuse of power. Romney knew it wouldn't remove Trump from office, and he knew he would be "vehemently denounced" and abused by Trump for his vote. But his explanation — "I take an oath before God as enormously consequential" — was that he swore to God that he would render impartial justice, and despite his selfish preference to acquit Trump, doing so would violate that oath, given what his mind and reason had discerned from the evidence.

In other words, Romney was saying he honored his commitment to God over his partisan fealty to Trump. And judging by his response, Trump didn't get that distinction, or didn't agree with it. "I don't like people who use their faith as justification for doing what they know is wrong," Trump said, in what appears to be a quasi-official talking point.

The Bible has a lot of internal inconsistencies, but the Gospels are very clear on what Jesus wanted to communicate to his followers about loving God and loving other people. "You have heard that it was said, 'You shall love your neighbor and hate your enemy,'" Jesus said in his Sermon on the Mount (Mt 5:33-34). "But I say to you, love your enemies and pray for those who persecute you."

Jesus also makes clear that he wants his followers to avoid letting material possessions come between them and God and provide for those with fewer financial or spiritual resources. Christianity is a communitarian religion as well as a personal struggle. "You cannot serve God and wealth," Jesus said. Worshipping money is a form of idolatry, and idolatry is clearly heretical.

But Trump seems to view Christianity as a way to get what you want, not give what you can. Like most things with Trump, it is transactional: He will push policies favored by conservative Christians — abortion, judges, prayer in school — as long as they continue to believe in him, remain his most enduring base of support. If they have to choose between what Trump says and what Jesus says, Trump's faithful must go with Trump. Loyalty is the first commandment.