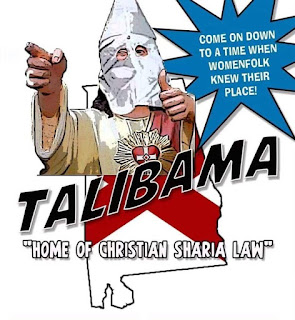 The more I ponder Talibama's new abortion law, and the new slightly less Sharia abortion laws in other mostly southern states, the more I wonder if that new Confederacy should not adopt Islam as its official religion?

I  wonder what the Sharia karma is for people who voted for Donald Trump, whose U.S. Supreme Court and federal appellate and district court appointees are the reason for the new Sharia abortion laws?


Trump has shaped Supreme Court – and many other federal appeals ...

Jul 16, 2018 - Trump has appointed more appeals court judges than any other recent ... confident in Trump to make good appointments to the federal courts, ...

In a Facebook discussion yesterday, launched by someone else, a fellow said the new abortion laws are not the result of religious influence.

I wondered if that person had a brain? Or even a soul?

I told a friend yesterday, who had voted for Trump because he would break up "the deep state," that what Trump did was reveal the real deep state in America.