Is the internal jihad humanity's only real chance to change and survive? 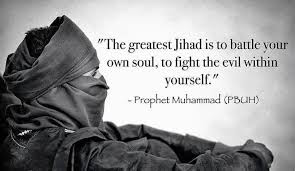 Yesterday, I took down every post showing at this blog, except the last one about Pottinger v. City of Miami. This morning, I took down that post.

As if a herald, maybe 2 weeks ago, a notice from Google appeared at this blog, saying my Google+ account was going away on April 2, 2019.

I've been doing some traveling and hanging out since leaving Key West last fall. I now have 9 homes in 6 different states, where I can hang my hat for a little or a long while. An old friend at one of those homes told me the other day that I have taken being homeless to a new level. I chuckled, said, yeah, a jump shift.

My friend said he is reading Kosmos Journal for Transformation, and that is helping him some. I looked at Kosmos and submitted a comment under one of their articles:

"A dear friend with chemical dependency and clinical depression told me today about "Kosmos, journal for global transformation". I told him a little about the dark night of the soul, which is induced from the spirit realm. The self-proclaimed dominant species on this planet, in the main, seem to have lost their rudder and the results are varied and visible and invisible. I come from the perspective of someone who has been through the dark night of the soul, and the black night, which makes the dark night seem like heaven. And, there were later dark nights. And, it all was instigated by angels, who are still poking me along, sometimes gently, sometimes not. Eventually, starting 2000, through now, I was put into different kinds of human political arenas. I concluded political parties are religions. Movements are religions. And, they most entirely look outward. Seeking to change what is around them, hoping that will make them feel better. I was not convinced that method would work before it was given to me to try to impact. I am not convinced now that it works. I think the only tried and true method is the internal movement, which requires a great deal of being stood in front of a mirror looking at self, while the outside life roughs us up and provides grist for the internal grindstone and furnace. That process requires a great deal of help, I think, from angels. ETs also are involved in trying to help Earthlings change in that way. Internally. From what was, to something else entirely. Death and rebirth, it has been called. That journey is not a best seller. It does not make money. It can be terribly lonely. It can freak out people not aware of such an experience. It can get the internal pilgrim ostracized, locked up, medicated. Yet, it is my opinion that the inner "jihad" is the only way humanity really will shift, and it is not, I don't think, something humanity, on its own, will ever bring off. It will have to be imposed from the spirit realm. On humanity. Across the board. No prisoners. Meanwhile, some people can, as has been done for a very long time, make that journey alone, or perhaps in pairs, or even small groups, with angelic help. If that's what they really want and the angels agree, or the angels impose it because their souls requested it despite their egos' wishes."